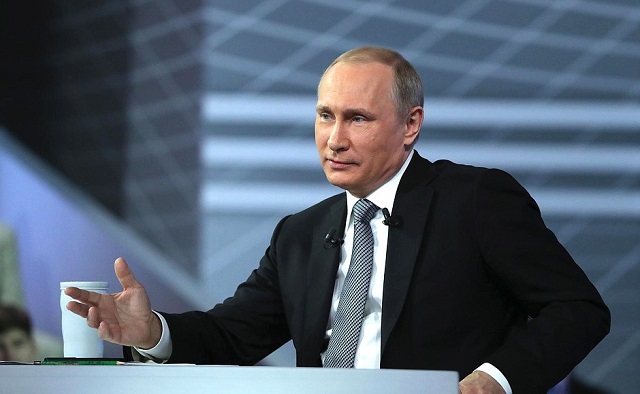 Russian President Vladimir Putin said he has proof no state secrets were leaked during a meeting between US President Donald Trump and Russian Foreign Minister Sergey Lavrov.

“I spoke to [Lavrov] today,” Putin said Wednesday at a press conference with Italian Prime Minister Paolo Gentiloni. “I’ll be forced to issue him with a reprimand because he did not share these secrets with us. Not with me, nor with representatives of Russia’s intelligence services. It was very bad of him.”

“If the US administration deems it possible, we are ready to provide the Senate and Congress with the transcript of the conversation between Lavrov and Trump,” Putin said.

“Kremlin aide Yury Ushakov followed up on Putin’s statement with a clarification that there was no audio recording at the Trump-Lavrov meeting, and the only form of record available is a transcript,” RT reports.

Russian Foreign Ministry spokesperson Maria Zakharova issued a mocking response to the [Washington Post’s] claims, posting on Facebook: “Have you guys been reading American newspapers again? Don’t read them. They can be used in many different ways, but one shouldn’t read them – recently it has become not only harmful, but dangerous.”

“We are seeing in the US a developing political schizophrenia,” Putin said.

“There is no other way I can explain the accusations against the acting US president that he gave away some secrets to Lavrov.”

Those who “are destabilizing the internal US political situation using anti-Russian slogans either don’t understand that they are bringing this nonsense in on their own side, and then they are just stupid, or else they understand everything, and then they are dangerous and corrupt people,” Putin said.

“Anyway, this is a US matter, and we don’t want and don’t plan to interfere,” the Russian president said.

This whole fake story is quickly collapsing like all the others.

The entire idea Trump shouldn’t share information about ISIS with Russia when Russia is the main force fighting ISIS is laughable on it’s face and only appeals to those in the media and intelligence community who think we’re still living through the Cold War.

Trump as president has the absolute right to divulge any information he wants, classified or not.

As President I wanted to share with Russia (at an openly scheduled W.H. meeting) which I have the absolute right to do, facts pertaining….

…to terrorism and airline flight safety. Humanitarian reasons, plus I want Russia to greatly step up their fight against ISIS & terrorism.

NBC News’ Richard Engel reported his intelligence source told him Trump told the Russians nothing “they didn’t already know” and it was “not new info.”

Most importantly, the “ally” these leaks pertained to was Israel. To suggest our largely one-way relationship would be harmed over Trump sharing some minor details with Russia about an ISIS laptop bomb threat when the US is giving them record amounts of aid is patently absurd.

It came out earlier this year Israel’s intelligence agencies met secretly with US intelligence and outrageously plotted behind the scenes not to share intelligence with the Trump administration, so it’s not like they’re currently working with the US anyways.

The real story here is the deep state openly sabotaging Trump’s presidency because they don’t agree with, or don’t like his policies.