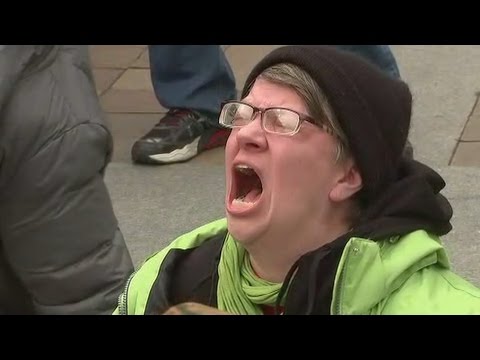 After the last election, the far-left in our society became a laughing stock. The social justice warriors, the progressives, the regressive left; whatever you want to call them, they became a joke after Trump was elected. And it wasn’t because they lost the election. It was because of how they reacted to losing. We all witnessed what amounted to a nationwide temper tantrum on November 9th. And in the weeks that followed, it became apparent that these people aren’t just childish. They are freaking insane.

However, it may surprise you to learn that these people aren’t just a joke in America. They are the laughing stock of the world. They are looked down upon, even in countries where they don’t have a significant presence.

In China for instance, they have a word for these people. They are called “baizuo” or the “white left” on social media. Which is interesting, because even though China has its fair share of socialists and communists, they don’t have a direct equivalent to our liberal snowflakes. Most of the Chinese are still fiercely nationalistic and anti-immigrant, regardless of political affiliation. That country just doesn’t have a large population of politically correct, affluent liberals (presumably, they were all killed off during the Great Leap Forward). So what does this term mean to the average Chinese citizen?

It might not be an easy task to define the term, for as a social media buzzword and very often an instrument for ad hominem attack, it could mean different things for different people. A thread on “why well-educated elites in the west are seen as naïve “white left” in China” on Zhihu, a question-and-answer website said to have a high percentage of active users who are professionals and intellectuals, might serve as a starting point.

The question has received more than 400 answers from Zhihu users, which include some of the most representative perceptions of the ‘white left’. Although the emphasis varies, baizuo is used generally to describe those who “only care about topics such as immigration, minorities, LGBT and the environment” and “have no sense of real problems in the real world”; they are hypocritical humanitarians who advocate for peace and equality only to “satisfy their own feeling of moral superiority”; they are “obsessed with political correctness” to the extent that they “tolerate backwards Islamic values for the sake of multiculturalism”; they believe in the welfare state that “benefits only the idle and the free riders”; they are the “ignorant and arrogant westerners” who “pity the rest of the world and think they are saviours”.

Baizuo has basically become the go to word for Chinese social media users, who want to trash other people in online debates. It’s also frequently used to make light of what is viewed in China, as the inherent weakness of western democracies. So not only has the far-left made themselves into a joke, they’re making everyone else who supports Western civilization look bad all around the world.

It just goes to show, the people who speak the loudest in society often become the face of that society, even if most sane people aren’t taking them seriously anymore.