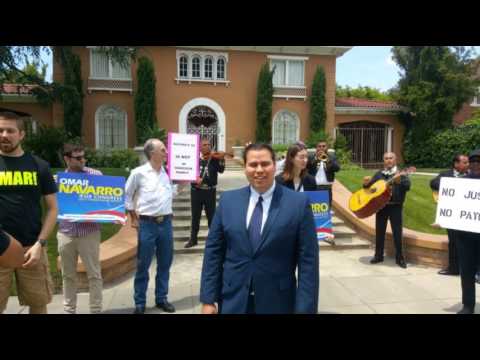 It’s a form of poetic justice for sure that unstable Representative Maxine Waters (D-CA) has been pursuing the impeachment of Donald Trump, and now is having protesters come to her house calling for her impeachment.

Waters resides in a $3 million mansion in Hancock Park in Los Angeles, California. Yet, she constantly tries to present herself as someone that is not in the upper class as to appeal to voters in her district. Most interesting is that Hancock Park is not in District 43, which she is said to represent.

One of her challengers, Omar Navarro, along with over a dozen protesters and a mariachi band decided to stage a protest at her home in LA. Waters was not at home at the time of the protest.

Heres are some pictures from the protest.

Announcement of candidacy to run for Congress in front of Maxine Waters home in Hancock Park for the 2018 election. https://t.co/3DpgAzzfio pic.twitter.com/YLbNajduDI

And here is video.

Thought Navarro lost to Waters in 2016, he is preparing to run again in 2018. On Wednesday, he tweeted.

“‘Hashtag Impeach Maxine,'” said Navarro. “See Maxine is talking about impeaching President Donald Trump and yet she doesn’t ask herself what about her? What about her not doing her job for 35 years?”

Several members of the Black and Latino community are calling on Waters to resign over her calls for impeachment of President Donald Trump over allegations regarding colluding with Russia, which have been unsubstantiated. During an interview with Jonathan Capehart with The Washington Post, Waters said there was zero evidence of Trump and his transition team colluding with the Russians.

“Have you seen anything – either through the intelligence briefings – anything to back any of the accusations that you’ve made?” Capehart asked.

“First of all,” Waters said. “Don’t forget that all of our intelligence agencies say – yes – they have the documentation that they did use the hacking on the DNC and some of us.”

Capehart interrupted: “But the collusion though?”

Reporter to Maxine Waters: Any evidence there was collusion between Trump and Russia

This came just one day after she told MSNBC’s Peter Alexander that if Hillary was elected she should have fired former FBI Director James Comey, but Donald Trump should not have fired him.

“I think the president, if the president had fired [Comey] when he first came in, he would not have to be in a position now where he is trying to make up a story about why it does not meet the smell test,” Waters said.

“So if Hillary Clinton had won the White House, would you have recommended that she fire FBI Director James Comey?” asked Alexander.

“Well, let me tell you something, if she had won the White House, I believe that given what he did to her, and what he tried to do, she should have fired him,” she said. “Yes.”

“No, no you’re not confused,” she said, oblivious to the fact that she is the one who is confused.

Several of the protesters spoke to KABC with regards to Waters.

“She thinks by putting down our president, we’re going to like her more,” said another. “Every time she talks, she makes me want to throw up.”

Maxine Waters has never been good for the people of California in Districts 29, 35 and now 43. She is nothing more than a political hack who is out for her own gain and the gain of the Democrat Party.