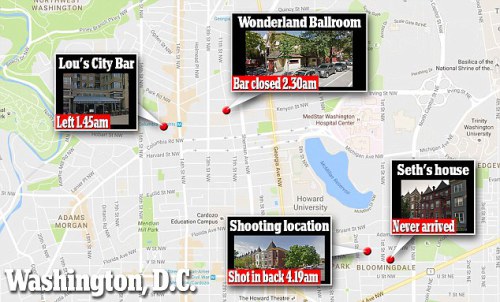 At a little past 4 AM early Sunday morning on July 10, 2016, 27-year-old Democratic National Committee (DNC) staffer Seth Rich was shot about a block from his apartment in a residential neighborhood of Washington, D.C.

More than 10 months after he was shot, Rich’s murder is still unsolved.

Both WikiLeaks founder Julian Assange and hacker Guccifer 2.0 had said Rich was the source of thousands of DNC emails that WikiLeaks published, to damaging effect on Hillary Clinton’s presidential campaign.

According to the D.C. Metropolitan Police Department’s Public Incident report, responding to the sound of gunshots at 2134 Flagler Pl. NW., police officers were on the scene by 4:20 AM and found Rich laying on the ground in the southwest corner of the intersection of W St. and Flagler Pl. NW., having been shot in his back but alive and conscious. He was taken to Washington Hospital Center where, at 5:57 AM or an hour and 37 minutes after police had first found him, was pronounced dead by an attending physician.

According to an anonymous poster on 4chan who claims to be an ER surgery resident at Washington Hospital Center who had operated on Rich’s “small” non-fatal gun wounds in his liver and bowel, Rich was stable and in recovery after his surgery, only to die under suspicious “fishy” circumstances hours later.

According to a Daily Mail investigation, before he was shot, Rich was a patron at Lou’s City Bar, a sports pub he frequented five or six nights a week. Daily Mail reporter Alana Goodman writes:

“Rich showed up alone that evening and sat at his usual leather stool in the corner of the bar. He was a regular at the pub, often showing up straight from the office in a shirt and tie and lugging his laptop bag.”

Rich left Lou’s City Bar at 1:45 AM (the bar closes at 2 AM on Saturday nights). Goodman recounts:

“Clearly inebriated, he was offered a ride home but refused, saying he was heading to Wonderland, another bar about 10 minutes walk away. No one at Wonderland could recall seeing Seth that morning but the bar shut up at 2:30.”

The general manager of Lou’s City Bar is Joe Capone. See his LinkedIn page here, and his Twitter @joecapone0206 here.

Now, citizen journalists on 4chan have uncovered that the general manager of Lou’s City Bar, Joe Capone, may have visited the Obama White House at least three times, the last visit being a mere four days before Seth Rich was murdered:

According to Email Finder, there’s a Joseph P. Capone, who is in his mid-40s and lives in Olney, MD, which is 18 minutes by car from Washington, DC.