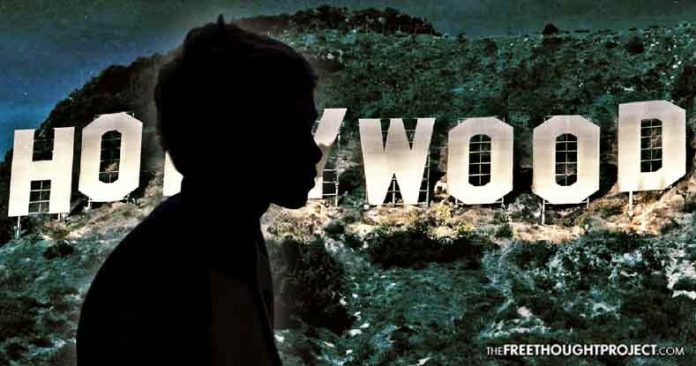 Jon Robberson is a 16 year veteran of Hollywood feature film, television, and commercial production. He worked behind the scenes at all of the major studios and networks, having worked on projects for such notables as Spielberg, Bruckheimer, Silver and Abrams, to name a few. He also left that scene because he says it is rife with pedophilia.

Dave Daubenmire, the host of the webcast Pass the Salt Live, interviewed Robberson this week. During the interview, the former insider spoke about an alleged global Satanic pedophile ring that controls Hollywood.

Trust us, we know how this sounds. But hear it out.

Robberson is not the first person to make these claims. As the Free Thought Project reported last year, childhood star turned adult actor Elijah Wood, also claimed Hollywood is in the midst of a massive sexual abuse scandal, which can be compared to that of Jimmy Savile in Britain.

What Wood is talking about is the rampant sexual abuse of childhood actors, which has been previously exposed by Corey Feldman as well as Corey Haim.

In an episode of their reality TV show, The Two Coreys, a candid fight broke out during which Haim claimed Feldman stood by and watched as a person Feldman “still hangs out with” and is “best friends with” proceeded to “rape” the 14-year-old Haim.

When explaining how he was able to escape the molestation during his childhood in Hollywood, Elijah noted that he had good parents who protected him and did not let him attend these parties.

“She was far more concerned with raising me to be a good human than facilitating my career,” he said.

Fast forward one year and another Hollywood insider has a similar story — with a Satanic twist.

“Much of what is used in Hollywood today that would be considered Luciferian in nature really comes from a lot of the Druidic incantations, the Druidic witchcraft, the worship of Gaia, of earth, in ninth and tenth century England,” Robberson said on the webcast. “And prior to that, you can trace that through Kabbalistic witchcraft and Jewish mysticism all the way back, really, to what was going on in Babylon.”

“There is a distinct through-line from the time of when the Babylonians were sacrificing kids to Moloch in the temple at the top of the Tower of Babel,” Robberson noted, explaining the dark history of this sadistic ritual. “From the time that they attempted to slap God in the face with that stuff to Hollywood today, you could do an exhaustive study and find a distinct through-line in the practice of witchcraft.”

“There is pedophilia running rampant in Hollywood,” Robberson said. He then noted, just like Wood, that this ring preys on young children and it is made up of the “highest upper echelons of Hollywood, executive VPs of development, producers, mega-power agents and the international bankers that fund all this stuff.”

“Once they’ve got the goods on you on video, they own you,” Robberson said.

Sadly, positions of power, whether state-backed or not, often attract society’s worst. Knowing they are above the law, these sickos are allowed to target innocents for their own disgusting desires.

In his interview, Elijah Wood summed up this notion perfectly when he said, “People with parasitic interests will see you as their prey.” And, unfortunately, they continue to get away with it.

As the Free Thought Project has previously pointed out, pedophilia among the elite is rampant. The problem has gotten so bad in England that officials issued an order last month to stop naming streets and landmarks after local heroes and politicians because they could later be exposed as pedophiles.

Domestically, these higher level arrests are few and far between as any time ‘the elite’ are mentioned alongside the term ‘pedophile,’ the Praetorian guard, aka the corporate media, shout down all those who dare pose any questions.

In January, admitted child rapist and former speaker of the house who is currently in jail, Dennis Hastert came across our radar after he demanded one of the children he raped pay back the hush money given to him by Hastert — because the victim broke his silence about the rape.

When the victim, known only as “Individial A,” broke his silence, Hastert’s child rapes were exposed — resulting in the subsequent prosecution.

Individual A did not go public with this information — he merely spoke to the FBI after the transactions were uncovered by investigators. However, this sicko couldn’t care less about airing this repugnant grievance in the public forum as it was almost entirely ignored by the media.

However, if you read the Washington Post or watch CNN, pedophilia is not a problem, and those who talk about it are tinfoil hat wearing kooks perpetuating ‘fake news.’