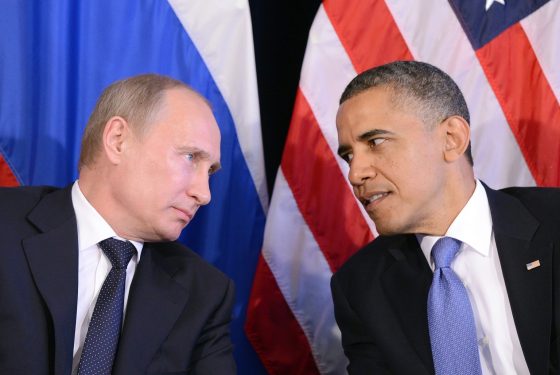 Russia-Gate remains in full swing, and the latest bout of hysteria is related to President Trump’s alleged sharing of intelligence with Russia.

The original report about the supposed leak came from The Washington Post.

The Post reported that the leak put a source of intelligence on the Islamic State at risk. But the spokeswoman for the Russian foreign ministry, Maria Zakharova, said on Tuesday that the reports were nothing except “yet another fake.”

As Darius Shatahmasebi wrote on Wednesday,

According to the Post, Trump gave his Russian counterparts information “considered so sensitive that details have been withheld from allies and tightly restricted even within the U.S. government.” Specifically:

“Trump went on to discuss aspects of the threat that the United States learned only through the espionage capabilities of a key partner. He did not reveal the specific intelligence-gathering method, but he described how the Islamic State was pursuing elements of a specific plot and how much harm such an attack could cause under varying circumstances. Most alarmingly, officials said, Trump revealed the city in the Islamic State’s territory where the U.S. intelligence partner detected the threat.”

Apparently, this information was too sensitive for Trump to give to Russian representatives, but not too sensitive for anonymous officials to leak to the Washington Post, who turn broadcasted it to the entire world.

In other words, the Post also knows the details of this classified information. Anonymous officials can leak sensitive information to an unaccountable media outlet, but Trump can’t disclose that information to a delegation of people who could actually benefit from the information? How does that work?

Just last year, the Post didn’t seem to have any problems with the US government sharing intelligence with Russia. 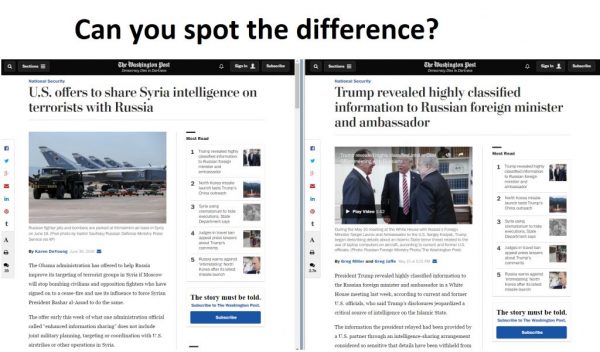 Here are some excerpts from the June 30, 2016 article shown in the image above, titled U.S. Offers to Share Syria Intelligence on Terrorists With Russia:

The offer early this week of what one administration official called “enhanced information sharing” does not include joint military planning, targeting or coordination with U.S. airstrikes or other operations in Syria.

In early May, as the cease-fire and U.N.-shepherded peace talks headed toward collapse, Secretary of State John F. Kerry and Russian Foreign Minister Sergei Lavrov agreed to send senior military officers to “sit at the same table” in Geneva, where they set up a center to monitor violations.

Kerry and other U.S. officials have remained in close contact with their Russian counterparts, trying out a series of possible initiatives to revitalize the cease-fire, including the new offer of increased intelligence sharing on terrorist positions.

Take a look at two more examples of articles from The Post about former President Obama’s relations with Russia.

These excerpts are from an article titled Obama Proposes New Military Partnership With Russia in Syria, dated June 30, 2016:

The Obama administration has proposed a new agreement on Syria to the Russian government that would deepen military cooperation between the two countries against some terrorists in exchange for Russia getting the Assad regime to stop bombing U.S.-supported rebels.

Under the proposal, which was personally approved by President Obama and heavily supported by Secretary of State John F. Kerry, the American and Russian militaries would cooperate at an unprecedented level, something the Russians have sought for a long time.

On July 13, 2016, The Post ran this article: Obama’s Syria Plan Teams up American and Russian Forces.

The Obama administration’s new proposal to Russia on Syria is more extensive than previously known. It would open the way for deep cooperation between U.S. and Russian military and intelligence agencies and coordinated air attacks by American and Russian planes on Syrian rebels deemed to be terrorists.

It was okay when Obama did it, but if Trump dares to try to work with Russia, the mainstream media loses its mind.

Two days ago, The Post wrote that Trump did not break the law when he talked about classified information with the Russians.