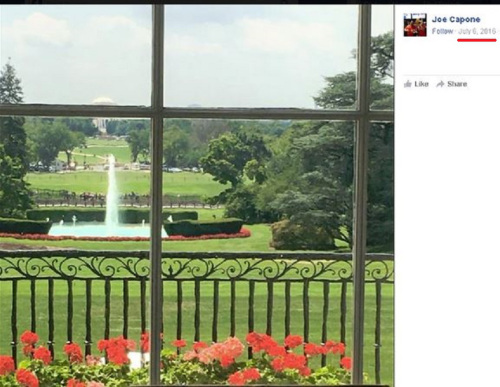 Yesterday, I published the post “Owner of bar where Seth Rich was last seen alive, may have visited Obama White House 4 days earlier,” in which I showed that White House Logs have a “Joseph P. Capone” visiting the Obama White House on July 6, 2016 — four days before DNC staffer Seth Rich was assassinated in the early morning hours of July 10, 2016, near his apartment in Washington, D.C.

Rich’s behavior that night suggests he had been drugged:

Both WikiLeaks founder Julian Assange and hacker Guccifer 2.0 had said Rich was the source of thousands of DNC emails that WikiLeaks published, to damaging effect on Hillary Clinton’s presidential campaign.

According to White House Logs, on July 6, 2016, a “Joseph P. Capone” visited the White House as part of a group of four, beginning at 12 noon and ending at 11:59 pm. The meeting location was the East Wing of the White House. The appointment (number U38825) had been made a week before on June 29, 2016. The other three people in Capone’s group were Allesandra J. Capone, Michael R. Capone, and Kymberlie N. Jeffery.

In my post yesterday, I asked if Joseph P. Capone is Joe Capone, the general manager of Lou’s City Bar that Rich had patronized before he was shot.

The proof is a pic that Joe Capone posted on July 6, 2016, the day of his White House visit. But you won’t find that pic on Capone’s Twitter account because he appears to have deleted all tweets after May 18, 2016. Fortunately, an enterprising citizen journalist captured a Facebook screenshot and posted it to 4chan:

As you can see, the pic was taken from INSIDE the White House, looking out onto the South Lawn fountain and, far away, the domed Thomas Jefferson Memorial.

Here’s a screenshot I took from Google Map, showing the White House at the bottom, the fountain, and the Jefferson Memorial at the top:

Lou’s City Bar general manager Joe Capone must be a very special person to get a meeting in the White House’s East Wing, which Wikipedia says “serves as office space for the First Lady and her staff”.

The MSM are strenuously avoiding any mention of Seth Rich, but are using the alleged but groundless Russia-Trump collusion to deflect attention away from Rich’s murder. Please help me publicize about this brave and principled young man via email and social media.

According to George Webb, an Alt. Media reporter, who visited Lou’s City Bar and interviewed Joe Capone (with the latter’s lawyer present), Capone said he wasn’t in the bar the night of July 9, 2016, but was in Ocean City, MD with his family (beg. 2:05 mark), and that “friends” were talking with Seth Rich in the ambulance on the ride to the hospital (2:56 mark)