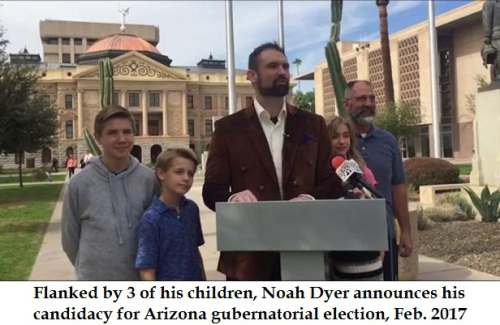 Even though I’ve chronicled America’s descent into moral filth for some 8 years now, every day on FOTM, some news still surprise me.

Incumbent first-term Republican Governor Doug Ducey, who became governor on January 5, 2015, will run for re-election. Among Ducey’s Demonrat challengers is a man named Noah Dyer, who prefers being called Noé, the Spanish form of the Hebrew name Noah.

Dyer describes himself on his campaign website as “an executive, educator, entrepreneur, and author” and “currently the Vice President of Marketing Strategies at a prominent Phoenix ad agency”. Dyer’s LinkedIn page is more forthcoming on his current job: he’s VP of Marketing Strategies for the ad agency On Advertising for less than two years, since June 2015.

He also describes himself as having “served a Mormon mission in Costa Rica before becoming agnostic,” “has been married, divorced, a homeless person” and “the proud father” of four children.

But that isn’t what Dyer is really known for.

On his campaign website, Dyer boasts that he is (in capital letters):

“A REFRESHINGLY HONEST CANDIDATE FOR A MODERN ARIZONA”

“Refreshingly honest” about what?

On his campaign website, Noah Dyer pronounces that he:

To no surprise, the “Progressive” media have poured on their praise and admiration for Dyer, which he proudly displays on his website:

“Dyer’s openness is obviously unusual in a politician.” -Slate

“Without a doubt, we need more honest politicians.” -The Doctors

“Everybody can appreciate someone who’s an open book.” -FoxNews.com

And if Arizona’s voters are not perturbed by Noah Dyer’s personal mores and sexual behavior, they should at least consider this:

“Noah has a negative net worth, given that he has nearly $100,000 in student loan debt. His income based loan repayment plan is actually insufficient to cover the interest, and his balance grows every year.” (Source: Noah Dyer’s website)

If Noah Dyer is voted to public office, Arizona voters should not be surprised by his fiscal incompetence for he has already and amply forewarned them with his “refreshing” honesty.