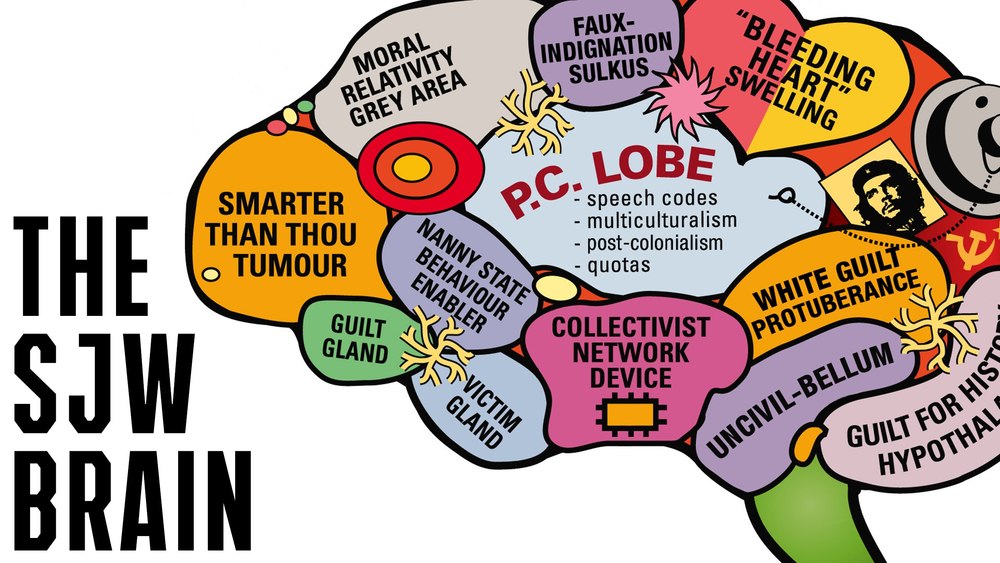 There is hope for America.

The Left’s vile behaviors since Hillary Clinton’s electoral loss to Donald Trump are so over-the-top, they are alienating some liberals.

Keri Smith is one of them. In a confessional essay, Smith calls the Left’s cultural Marxist ideology “a cult” and points to the hypocrisy of “social justice warriors (SJW)” whose hateful and murderous speech and behavior belie their professed values of equality, justice, liberty, tolerance and love — something that we on FOTM repeatedly have noted.

The most important part of Smith’s essay is her pointing out that the Left are trodding the dangerous path of dehumanizing their political opponents. (Recall Hillary Clinton’s dehumanization of Trump supporters as “deplorables”.) By dehumanizing, i.e., regarding other human beings as less than human “things,” violence and murder become justified. Don’t we slaughter livestock for food because they’re nonhuman “animals”?

That’s the tactic the Left have employed against the unborn — that the unborn human life growing in a woman’s womb is not a human person, but is merely a lump of bodily tissue, much like toenail that we clip and discard.

Smith writes in Medium on May 13, 2017 (I supplied the bold and red-color emphasis):

I’ve been undergoing a pretty significant change in the way I interpret the world [….] I know some of my friends have wondered why I’ve lately been so critical of the left, my home, so I wanted to share with you what a vocal part of my particular and admittedly self-selected echo chamber is like.

For the record, this is not illustrative of all of the left or even and especially of all of my liberal friends. […] I was talking with a friend who is also liberal and she does not see this kind of stuff regularly, like I do […. M]y vantage point may shed some light on why my beliefs are changing, and on where I see things possibly headed.

I see increasing numbers of so-called liberals cheering censorship and defending violence as a response to speech. I see seemingly reasonable people wishing death on others and laughing at escalating suicide and addiction rates of the white working class. I see liberal think pieces written in opposition to expressing empathy or civility in interactions with those with whom we disagree. I see 63 million Trump voters written off as “nazis” who are okay to target with physical violence. I see concepts like equality and justice being used as a mask for resentful, murderous rage.

The most pernicious aspect of this evolution of the left, is how it seems to be changing people, and how rapidly since the election. […] How easy is it for ordinary humans to commit atrocious acts? History teaches us it’s pretty damn easy when you are blinded to your own hypocrisy. When you believe you are morally superior, when you have dehumanized those you disagree with, you can justify almost anything. In a particularly vocal part of the left, justification for dehumanizing and committing violence against those on the right has already begun.

I don’t yet know what to call this part of the left. Maajid Nawaz calls them the “Regressive Left.” Others call them SJWs (Social Justice Warriors) or the Alt-Left. The ideology is post-modernist cultural marxism, and it operates as a secular religion. Most are indoctrinated in liberal elite colleges, though many are being indoctrinated online these days. It has its own dogma and jargon, meant to make you feel like a good person, and used to lecture others on their ‘sin.’ “Check your privilege”- much like “mansplaining” and “gaslighting”- all at one time useful terms- have over time lost a lot of their meaning. These days I see them most frequently being abused as weaponized ad hominem attacks on a person’s immutable identity markers….a way to avoid making an argument, while simultaneously claiming an unearned moral highground in a discussion.

I have been wondering why more people on the left are not speaking up against violence, in favor of free exchange of ideas and dialogue, in favor of compassion. But I know why. I was in the cult. Part of it is that you are a true believer, and part of it is that you are fearful of being called an apostate — in being trashed as a sexist, racist, homophobic, transphobic, Islamophobic, xenophobic, fascist, white supremacist nazi. A friend recently wrote to me privately to say they find my latest posts “refreshing,” and that they believe in free speech, but as someone who works in entertainment, they can’t say anything that might cause them to lose their job. As someone who has gone through and is still going through a change in my underlying systems of belief, I can say this: when you finally get past fear, it is so liberating. After a lot of self-reflection, I eventually came to the opinion that if I lose friends or jobs over trying to speak and find the truth in situations, and to do so in a way that reflects my belief in compassion, then perhaps those were not friends or jobs that were healthy for my growth.

Since shedding the prison of my former ideology, I have a renewed passion for reading, a newfound interest in philosophy, psychology, history and spirituality. Instead of trying to fix others, these days I try to focus on improving myself, which I can tell you is a *much* harder though less futile endeavor. I question myself daily. I try to make a gratitude list daily. I try to meditate, although I admit I’m pretty shitty at it so far. I observe my emotional response to stimuli, then try to let it pass and practice empathy in my disagreements with others. Many times I fail, but over time it is getting easier (though I doubt it will ever be easy). I believe I finally understand that quote, “Be the change you want to see in the world.” It is not enough to speak about a belief in equality, justice, liberty, tolerance and love if by your actions you are illustrating the opposite by dehumanizing people, calling for their murder, justifying physical violence against them. Your actions speak louder than words.

[…] I believe taking on the task of honestly assessing and trying to improve my character, and speaking up for principles of equality, justice, free speech, liberty, peace and love in a WAY that supports those principles rather than increasing resentment, hatred, and murderous rage, is the way to change the world. If that makes me a moron, a naive peacenik, a privileged bigot -a heretic- in your ideology, so be it.

Keri Smith is to be applauded for her clarity of vision, honesty, and integrity. What a shame that she has seen the truth, but not her fellow liberals in the MSM.