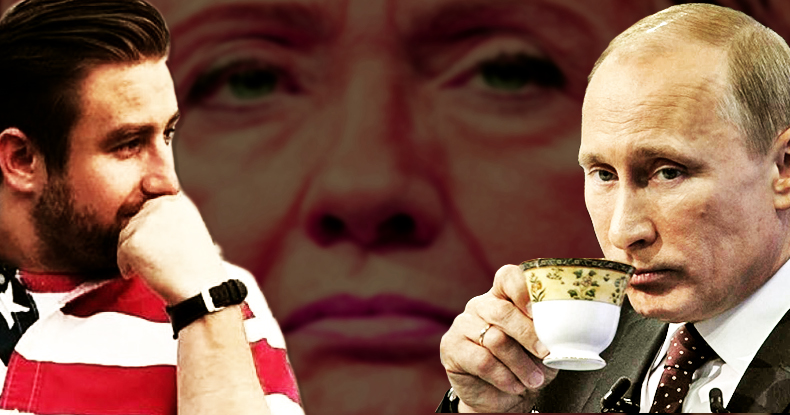 Last week, a bombshell was dropped concerning murdered DNC staffer Seth Rich who was gunned down in what is said to be an attempted robbery in Washington, DC last July, and that bombshell would lead anyone to believe he was the source of the leaked emails that Wikileaks published last year just before the Democratic National Convention. However, the Russian Embassy in the United Kingdom responded to the news with a picture that we used and it seems to be implying that Hillary Clinton was behind his murder.

Last August, Wikileaks founder Julian Assange implied that Rich was the Wikileaks source for the release of tens of thousands of DNC emails that were released.

In speaking of Rich’s murder and making the suggestion, Assange said, “We have to understand how high the stakes are in the United States.”

Rod Wheeler, a former DC homicide investigator told Fox News, “My investigation up to this point shows there was some degree of email exchange between Seth Rich and WikiLeaks. I do believe that the answers to who murdered Seth Rich sits on his computer on a shelf at the DC police or FBI headquarters.”

Wheeler also claims that a source inside the DC police department told him that investigators were told to stand down in Rich’s case.

#WikiLeaks informer Seth Rich murdered in US but 🇬🇧 MSM was so busy accusing Russian hackers to take notice. pic.twitter.com/0XVezTyfHM

Of course, President Trump didn’t insist any such thing, but the fact that the Russian embassy would send out such a tweet indicates that they think she was behind Rich’s death, and to be frank, I think that too. After all, consider the long line of bodies strewn in the wake of Hillary Clinton’s pursuit of political power.

An FBI forensic report of Rich’s computer — generated within 96 hours after Rich’s murder — showed he made contact with WikiLeaks through Gavin MacFadyen, a now-deceased American investigative reporter, documentary filmmaker, and director of WikiLeaks who was living in London at the time, the federal source told Fox News.

“I have seen and read the emails between Seth Rich and WikiLeaks,” the federal investigator told Fox News, confirming the MacFadyen connection. He said the emails are in possession of the FBI, while the stalled case is in the hands of the Washington Police Department.

The revelation is consistent with the findings of Wheeler, whose private investigation firm was hired by a third party on behalf of Rich’s family to probe the case.

According to the late Gavin MacFadyen of Wikileaks, there were 44,053 emails and 17,761 attachments from Democratic National Committee leaders that were transferred from Rich to MacFadyen before May 21. The emails were dated from January 2015 to May 2016.

The DNC emails were released just 12 days after Rich was murdered, which led to then DNC Chairwoman Debbie Wasserman Schultz resigning and a flood of questions being asked regarding Hillary Clinton campaign chairman John Podesta’s shady dealings.

Wikileaks announced a huge reward for information that would lead to the arrest and conviction of those that murdered Rich.

“WikiLeaks has decided to issue a US$20k reward for information leading to a conviction for the murder of DNC staffer Seth Rich,” Wikileaks announced.

In addition to the money offered by Wikileaks, The Washington Metropolitan Police is offering a reward of up to $25,000 and Republican lobbyist Jack Burkman has offered a $130,000 reward for information leading to the arrest and conviction of Rich’s murderers.

Surveillance video does exist of Rich’s murder. As of now, those that murdered Seth Rich remain at large.

While I don’t believe Hillary Clinton pulled the trigger, I do question whether or not she had something to do with the Rich’s murder since the release of all those emails to Wikileaks occurred just before he was killed, and Wikileaks released them inside of two weeks of his death. What do you think?