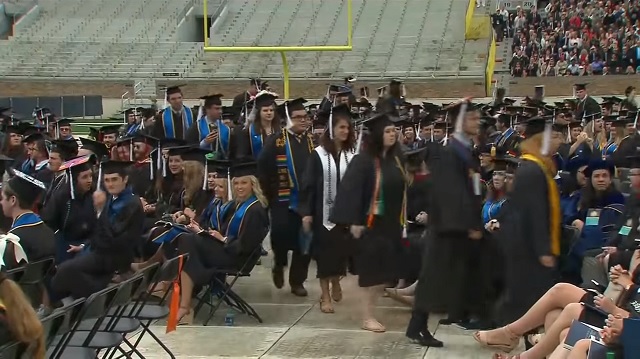 From the looks of it, they could use the exercise.

Dozens of students at the University of Notre Dame walked out of their commencement ceremony Sunday when Vice President Mike Pence took the stage — in protest of the administration and policies he represents.

Some members of the larger crowd cheered the walk-outs on, while others booed the students who marched out of gates 27 and 28 of Notre Dame Stadium during the school’s 172nd commencement. The walk-out came before the students received their degrees, and they were not allowed back in, officials said.

The move was not totally unexpected, since the student organization WeStaNDFor had shared their plans ahead of time. They believe that the politics Pence, the former Indiana governor who was raised Catholic, represented contradicted the Catholic social virtues Notre Dame extols.

Here’s some pictures they shared afterwards so they could bask in praise on Twitter:

Students gather after walking out of their own graduation to protest @VP pic.twitter.com/e0mOusk7Ye

They said they held the walkout to further the Catholic tradition of fighting for LGBT+²BBQ-BLT-LETTUCE&TOMATO rights and whatnot.

Great to see #WalkoutND gaining momentum. If anyone is interested in the reasons we protest take a look at our press release! pic.twitter.com/rvN9GEeVV2