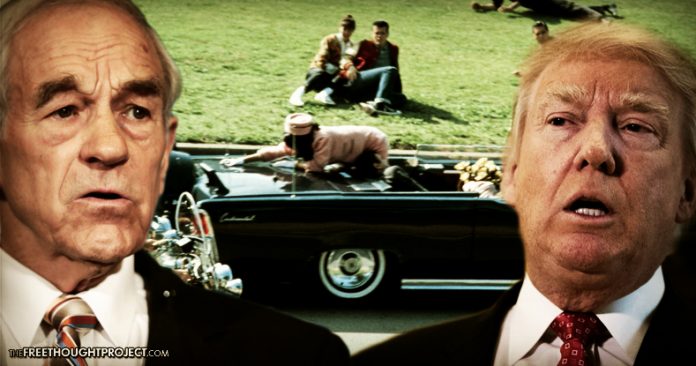 Former Congressman Ron Paul opined about President Trump’s alleged involvement with Russia. Paul equated Trump’s relationship with Russia to assassinated President John F. Kennedy’s attempts to extend the olive branch to the USSR, a move which got him killed, according to some.

Presumably in light of Thursday’s call for impeachment of the president by Representative Al Green (D-TX), and with the appointment of former FBI Director Robert Mueller as a special prosecutor to investigate dubious claims the president and his campaign colluded with Russia to undermine the election of 2016, Paul posted a message to Facebook, which reads:

Which President had the following accusations cast against him:

1) He has betrayed the Constitution, which he swore to uphold.
2) He has committed treason by befriending Russia and other enemies of America.
3) He has subjugated America’s interests to Moscow.
4) He has been caught in fantastic lies to the American people, including personal ones, like his previous marriage and divorce.

No, it was President Kennedy.

What lots of Americans don’t realize, because it was kept secret from them for so long, is that what Trump has been enduring from the national-security establishment, the mainstream press, and the American right-wing for his outreach to, or “collusion with,” Russia pales compared to what Kennedy had to endure for committing the heinous “crime” of reaching out to Russia and the rest of the Soviet Union in a spirit of peace and friendship.

The Ron Paul Liberty Report writer described Kennedy’s actions during his tenure as president, which ultimately cost him his head, literally. Kennedy wanted peace, as evidenced by his June 1963 speech known as the “Peace Speech.”

The speech was given at the commencement ceremony for American University, held at the John M. Reeves Athletic Center in Washington, D.C. Calling it the “most important topic on earth,” Kennedy pled for world peace. He asked,

What kind of peace do we seek? Not a PAX Americana, enforced on the world by American weapons of war. Not the peace of the grave or the security of the slave. I am talking about genuine peace, the kind of peace that makes life on earth worth living. The kind that enables men and nations to grow and to hope and to build a better life for their children. Not merely peace for Americans but peace for all men and women. not merely peace in our time but peace in all time. I speak of peace in the new face of war. Total war makes no sense.

Kennedy proceeded to describe the catastrophic firepower nuclear arms possess and which could destroy life for all mankind.

Sounds like the “Make America Great Again” and “Make America Safe Again” campaign slogans used by the current sitting president, doesn’t it? After all, peace must be present before prosperity can be enjoyed.

At the time the speech was given, Hornberger described, the CIA was at work throughout the world fighting the spread of communism. The writer detailed the agency’s involvement in the assassination and overthrow of communists and Russian sympathizers throughout the world, including, but not limited to, Guatemalan President Jacobo Arbenz, Cuban leader Fidel Castro, Congo’s leader Patrice Lamumba, and Chilean President Salvador Allende.

In the eyes of the national-security establishment, one simply did not reach out to Russia, Cuba, or any other “enemy” of America. Doing so, in their eyes, made Kennedy an appeaser, betrayer, traitor, and a threat to “national security.”

Paul’s writer described how Kennedy angered the Deep State, National Security establishment when he negotiated with Russia to end above-ground nuclear testing, promised to remove American troops from South Vietnam, and began secret talks to end the Cold War with Russia and Cuba.

With Trump being accused this week of passing classified information to Russian diplomats, Hornberger says the president crossed the same lines in the sand which Kennedy crossed — a move which had angered the latter’s national security enemies so much, they allegedly plotted and eventually were successful in assassinating him, pinning the blame on patsy, Oswald.

Trump claimed to have joined hands with Russia to fight against ISIS. But as The Free Thought Project has reported on numerous occasions — and as has been verified by members of Congress, such as Hawaii’s Tulsi Gabbard — the U.S. has been directly or indirectly funding ISIS since its inception.

If history repeats itself, Trump is apparently treading on thin ice from members within his own government. If Kennedy was assassinated by nefarious secret government entities within the Deep State, that same apparatus may come after Trump, too.

This is the implied warning in Hornberger’s essay.

Even facing possible impeachment, Trump is, for the moment, still president of the most powerful country in the world. It is, however, a nation which has started two major wars within the last three decades and is teetering on the brink of World War III with Russia, Iran, North Korea, and possibly China.

But it’s still not too late to change course.

As Kennedy stated in his Peace Speech, the Soviet Union

…should let each nation, choose its own future so long as that choice does not interfere with the choices of others. The communist drive to impose their political and economic system on others is the primary cause of world tension today. For their can be no doubt that, if all nations could refrain from interfering in the self-determination of others, the peace would be much more assured.”

Unfortunately, the tables have turned, and the U.S. is now the one attempting to impose its system of democracy and its own financial interests on the countries of the world.