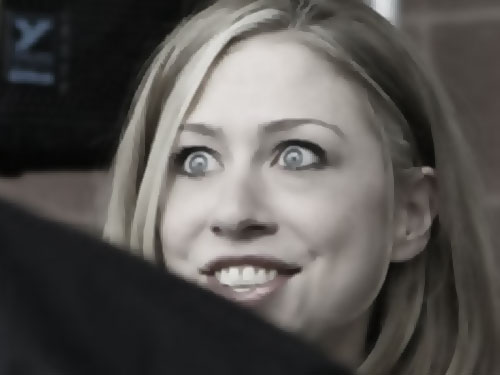 It’s always a good day when the political elites say something so asinine that even their own followers have no option but to roll their eyes. When Chelsea Clinton opens her mouth, it’s usually been to pay homage to her parents and her savior, Barack Obama. But this time, we get a little more evidence that she’s gone off the deep end.

Chelsea Clinton said that “climate change” and “child marriage” are “interconnected” issues on Monday. Participating in a left-wing discussion panel framed as a meeting for “social justice,” Chelsea was introduced as an “activist, thought leader, and change agent.” The event was hosted by CARE, a leftist 501(c)(3) public charity that demands international wealth redistribution under the guise of “foreign aid,” “international development,” and “humanitarianism.” Let’s wait with bated breath for these holier-than-thou rich liberals to demand the Saudi billionaires “redistribute” their money.

Chelsea framed the burning of fossil fuels as exacerbating other perceived social and political issues. She used “climate change” or “global warming” as the catalyst saying everything liberals have a problem with is connected.

[We] carry multiple concerns in both our head and our heart. Just listening to the concerns around education and climate change, women’s health, child marriage, access to technology, all of those are of course interconnected. We have to focus on each of them in their interconnectedness.

She admitted in her first sentence that all these things are in their heads as perceived issues. It’s not that these “issues” don’t exist, but pretending that the government is the cure through socialism is bit much. Child marriage goes back long before the fabrication of global warming. It was actually quite common in the Medieval times and there weren’t any ridiculous liberals complaining about the “interconnectedness” of all of their made-up issues.

But history doesn’t exist if you’re a liberal. The Nazi’s weren’t REAL socialists, just ask liberals – even though it was literally right in their party’s name. And Venezuela doesn’t have REAL socialism, even though that’s literally what the controlling government ran on and are still naming themselves. The comforting lies liberals tell themselves so that they can get through the day never ceases to amaze. Barbara Bush, the eldest daughter of former President George Bush, also joined the panel, describing access to health care goods and services as “a right” while hyping “social justice.”

I’m really lucky in that the work that I do at Global Health Corps, I get to work with young leaders from around the world that are passionate about social justice and believe that health is a human right.

Clinton also repeatedly stated that “health is a human right.” There is one simple reason why “health” isn’t a human right.  Some people are born unhealthy or with problems. How the hell are you going to tell the person (for example) born with cerebral palsy that they have a “right to health?” The condition cannot be cured. This is seriously why not even liberals should take themselves seriously anymore. It’s almost like they are making up fake issues out of boredom.

According to the Daily Wire, prevalent themes of this event included “feminism” (framing females as oppressed relative to and by men across the entirety of human history), “social justice” (religious groups such as Muslims were framed as “marginalized” in America and the broader West; income and wealth inequality between varying groups), and positioning socialism as a remedy for poverty. But Venezuela is proving right now that socialism is actually the root cause of poverty.

The liberals also spent time whining about Donald Trump cutting foreign aid. But they didn’t offer up any of their own money to help combat starvation or buy medicine for poor people. They just simply want the government to steal more from others to make their dreams come true. That’s some moral high ground, ladies. Liberal forums such as this one, starring nuts like Chelsea Clinton, make it impossible for thinking humans to comprehend how these wacky ideas even form to begin with. Everything that was discussed in this panel was a reason that Trump beat Clinton’s mother last November in an obviously rigged election.

Two things liberals will never be able to redistribute are intelligence and class.