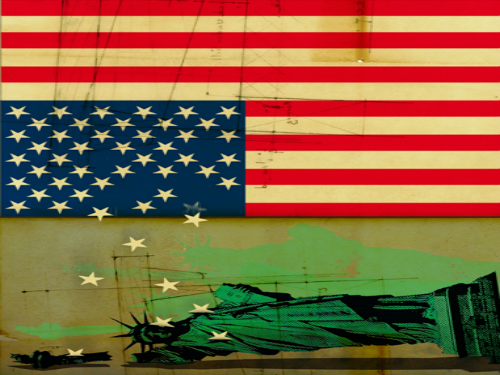 “You have such a fervent, passionate, evangelical faith in this country…why in the name of God don’t you have any faith in the system of government you’re so hell-bent to protect? You want to defend the United States of America, then defend it with the tools it supplies you with—its Constitution. You ask for a mandate, General, from a ballot box. You don’t steal it after midnight, when the country has its back turned.”—Seven Days in May (1964)

No doubt about it.

The coup d’etat has been successful.

The Deep State—a.k.a. the police state a.k.a. the military industrial complex—has taken over.

The American system of representative government has been overthrown by a profit-driven, militaristic corporate state bent on total control and global domination through the imposition of martial law here at home and by fomenting wars abroad.

It always points the way.

Every successive president starting with Franklin D. Roosevelt has been bought—lock, stock and barrel—and made to dance to the tune of the Deep State.

Even Dwight D. Eisenhower, the retired five-star Army general -turned-president who warned against the disastrous rise of misplaced power by the military industrial complex was complicit in contributing to the build-up of the military’s role in dictating national and international policy.

Enter Donald Trump, the candidate who swore to drain the swamp in Washington DC.

Instead of putting an end to the corruption, however, Trump has paved the way for lobbyists, corporations, the military industrial complex, and the Deep State to feast on the carcass of the dying American republic.

Just recently, for instance, Trump—boasting about the purchase of lots of beautiful military equipment because nobody makes it like the United States—agreed to sell Saudi Arabia more than $110 billion in military weapons and “tanks and helicopters for border security, ships for coastal security, intelligence-gathering aircraft, a missile-defense radar system, and cybersecurity tools.”

Meanwhile, Trump—purportedly in an effort to balance the budget in 10 years—wants to slash government funding for programs for the poor, ranging from health care and food stamps to student loans and disability payments.

The military doesn’t have to worry about tightening its belt, however. No, the military’s budget—with its trillion dollar wars, its $125 billion in administrative waste, and its contractor-driven price gouging that hits the American taxpayer where it hurts the most—will continue to grow, thanks to Trump.

This is how you keep the Deep State in power.

The rich will get richer, the poor will get poorer, the military will get more militaristic, America’s endless wars will get more endless, and the prospect of peace will grow ever dimmer.

As for the terrorists, they will keep on being played for pawns as long as Saudi Arabia remains their breeding ground and America remains the source of their weapons, training and know-how (15 of the 19 terrorists—including Osama bin Laden—who carried out the 9/11 attacks were from Saudi Arabia).

As Bertram Gross noted in Friendly Fascism: The New Face of Power in America, “evil now wears a friendlier face than ever before in American history.”

Writing in 1980, Gross predicted a future in which he saw:

…a new despotism creeping slowly across America. Faceless oligarchs sit at command posts of a corporate-government complex that has been slowly evolving over many decades. In efforts to enlarge their own powers and privileges, they are willing to have others suffer the intended or unintended consequences of their institutional or personal greed. For Americans, these consequences include chronic inflation, recurring recession, open and hidden unemployment, the poisoning of air, water, soil and bodies, and, more important, the subversion of our constitution. More broadly, consequences include widespread intervention in international politics through economic manipulation, covert action, or military invasion…

This stealthy, creeping, silent coup that Gross prophesied is the same danger that writer Rod Serling warned against in the 1964 political thriller Seven Days in May, which put the military in charge of a coup that would institute martial law packaged as a well-meaning and overriding concern for the nation’s security.

On the big screen, the military coup is foiled and the republic is saved in a matter of hours. In the real world, however, the plot thickens and spreads out over the past half century.

We’ve been losing our freedoms so incrementally for so long—sold to us in the name of national security and global peace, maintained by way of martial law disguised as law and order, and enforced by a standing army of militarized police and a political elite determined to maintain their powers at all costs—that it’s hard to pinpoint exactly when it all started going downhill, but we’re certainly on that downward trajectory now, and things are moving fast.

The question is no longer whether the U.S. government will be preyed upon and taken over by the military industrial complex. That’s a done deal.

It will not be revived or restored without a true revolution of values and a people’s rebellion the likes of which we may not see for a very long time.

America is a profitable business interest for a very select few, and war—wars waged abroad against shadowy enemies and wars waged at home against the American people—has become the Deep State’s primary means of income.

If America has been at war more than we’ve been at peace over the past half century, it’s because the country is in the clutches of a greedy military empire with a gargantuan, profit-driven appetite for war. Indeed, the U.S. has been involved in an average of at least one significant military action per year, “ranging from significant fighting in Vietnam, Iraq and Afghanistan to lesser incursions in such far-flung countries as Kuwait, Bosnia, Pakistan, Libya, Grenada, Haiti and Panama… That total does not count more limited U.S. actions, such as drone strikes.”

In order to maintain a profit margin when there are no more wars to be fought abroad, one would either have to find new enemies abroad or focus on fighting a war at home, against the American people, and that’s exactly what we’re dealing with today.

Had the government tried to ram such a state of affairs down our throats suddenly, it might have had a rebellion on its hands.

Instead, the American people have been given the boiling frog treatment, immersed in water that slowly is heated up—degree by degree—so that they’ve fail to notice that they’re being trapped and cooked and killed.

“We the people” are in hot water now.

As I make clear in my book Battlefield America: The War on the American People, the Constitution doesn’t stand a chance against a federalized, globalized standing army protected by legislative, judicial and executive branches that are all on the same side, no matter what political views they subscribe to: suffice it to say, they are not on our side or the side of freedom.

From Clinton to Bush, then Obama and now Trump, it’s as if we’ve been caught in a time loop, forced to re-live the same thing over and over again: the same assaults on our freedoms, the same disregard for the rule of law, the same subservience to the Deep State, and the same corrupt, self-serving government that exists only to amass power, enrich its shareholders and ensure its continued domination.

The republic has fallen to fascism with a smile.

As Bertram Gross wrote in what may have been his most prescient warning:

In 1935 Sinclair Lewis wrote a popular novel in which a racist, anti-Semitic, flag-waving, army-backed demagogue wins the 1936 presidential election and proceeds to establish an Americanized version of Nazi Germany. The title, It Can’t Happen Here, was a tongue-in-cheek warning that it might. But the “it” Lewis referred to is unlikely to happen again any place… Anyone looking for black shirts, mass parties, or men on horseback will miss the telltale clues of creeping fascism. In any First World country of advanced capitalism, the new fascism will be colored by national and cultural heritage, ethnic and religious composition, formal political structure, and geopolitical environment… In America, it would be supermodern and multi-ethnic-as American as Madison Avenue, executive luncheons, credit cards, and apple pie. It would be fascism with a smile. As a warning against its cosmetic facade, subtle manipulation, and velvet gloves, I call it friendly fascism. What scares me most is its subtle appeal.

I am worried by those who fail to remember-or have never learned -that Big Business-Big Government partnerships, backed up by other elements, were the central facts behind the power structures of old fascism in the days of Mussolini, Hitler, and the Japanese empire builders. I am worried by those who quibble about labels… I am upset with those who prefer to remain spectators until it may be too late… I am appalled by those who stiffly maintain that nothing can be done until things get worse or the system has been changed. I am afraid of inaction. I am afraid of those who will heed no warnings and who wait for some revelation, research, or technology to offer a perfect solution. I am afraid of those who do not see that some of the best in America has been the product of promises and that the promises of the past are not enough for the future. I am dismayed by those who will not hope, who will not commit themselves to something larger than themselves, of those who are afraid of true democracy or even its pursuit.

Elections will not save us.

Learn the treacherous lessons of 2008 and 2016:  presidential elections have made a mockery of our constitutional system of government, suggesting that our votes can make a difference when, in fact, they merely serve to maintain the status quo.

Start now—in your own communities, in your schools, at your city council meetings, in newspaper editorials, at protests—by pushing back against laws that are unjust, police departments that overreach, politicians that don’t listen to their constituents, and a system of government that grows more tyrannical by the day.

If you wait until 2020 to rescue our republic from the clutches of the Deep State, it will be too late.