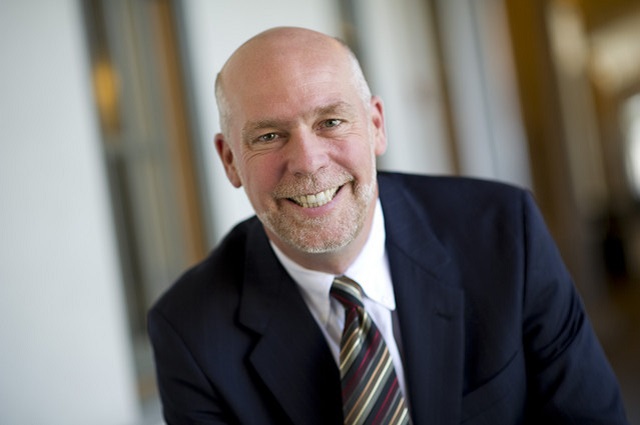 Greg Gianforte just body slammed me and broke my glasses

The Republican candidate for Montana’s congressional seat slammed a Guardian reporter to the floor on the eve of the state’s special election, breaking his glasses and shouting, “Get the hell out of here.”

Ben Jacobs, a Guardian political reporter, was asking Greg Gianforte, a tech millionaire running for the seat vacated by Ryan Zinke, about the Republican healthcare plan when the candidate allegedly “body-slammed” the reporter.

“He took me to the ground,” Jacobs said by phone from the back of an ambulance. “This is the strangest thing that has ever happened to me in reporting on politics.”

Jacobs subsequently reported the incident to the police. The Gallatin County sheriff’s office is investigating.

A statement by campaign spokesman Shane Scanlon blamed Jacobs for the altercation, saying that he “entered the office without permission, aggressively shoved a recorder in Greg’s face, and began asking badgering questions”. “Jacobs was asked to leave,” the statement reads. “After asking Jacobs to lower the recorder, Jacobs declined. Greg then attempted to grab the phone that was pushed in his face. Jacobs grabbed Greg’s wrist, and spun away from Greg, pushing them both to the ground.

“It’s unfortunate that this aggressive behavior from a liberal journalist created this scene at our campaign volunteer BBQ.”

Scanlon’s account appears to be contradicted by audio of the abortive interview recorded by Jacobs. The audio does not capture Jacobs being asked to leave or lower his recorder, but does contain an apparent reference to the Guardian’s previous attempts to report on Gianforte. “I’m sick and tired of you guys,” Gianforte said. “The last guy who came here did the same thing. Get the hell out of here. Get the hell out of here. The last guy did the same thing. Are you with the Guardian?”

The Guardian released this anti-white, heavily edited propaganda piece on Tuesday which featured an interview with Gianforte at the end:

A clip from it went viral which featured a white guy telling the Guardian reporter he doesn’t “look British.”

It’s supposed to be scandalous because even though his mother is ethnically Spanish, being British is an idea or something. No doubt it would be deeply offense to tell him, “you look Spanish.”

The clip would perhaps be interesting if they didn’t manipulatively edit out their actual interaction with a blatant jump cut in the middle.

Regardless, the same hack reporter attacked Gianforte from the right by asking him why he only reluctantly supported Donald Trump. Gianforte was noticeably angry. Faith, Keith and I arrived early to set up for the interview in a room adjacent to another room where a volunteer BBQ was to take place. As the time for the interview neared, Gianforte came into the room. We exchanged pleasantries and made small talk about restaurants and Bozeman.

During that conversation, another man — who we now know is Ben Jacobs of The Guardian — walked into the room with a voice recorder, put it up to Gianforte’s face and began asking if him if he had a response to the newly released Congressional Budget Office report on the American Health Care Act. Gianforte told him he would get to him later. Jacobs persisted with his question. Gianforte told him to talk to his press guy, Shane Scanlon.

At that point, Gianforte grabbed Jacobs by the neck with both hands and slammed him into the ground behind him. Faith, Keith and I watched in disbelief as Gianforte then began punching the man, as he moved on top the reporter and began yelling something to the effect of “I’m sick and tired of this!”

Jacobs scrambled to his knees and said something about his glasses being broken. He asked Faith, Keith and myself for our names. In shock, we did not answer. He then said he wanted the police called and went to leave. Gianforte looked at the three of us and repeatedly apologized. At that point, I told him and Scanlon, who was now present, that we needed a moment. The men then left.

To be clear, at no point did any of us who witnessed this assault see Jacobs show any form of physical aggression toward Gianforte, who left the area after giving statements to local sheriff’s deputies.

Gianforte’s campaign is handling the incident all wrong:

His campaign should have just tried to make a joke out of it.

“Greg Gianforte: he’ll take the fight to the liberal media.”