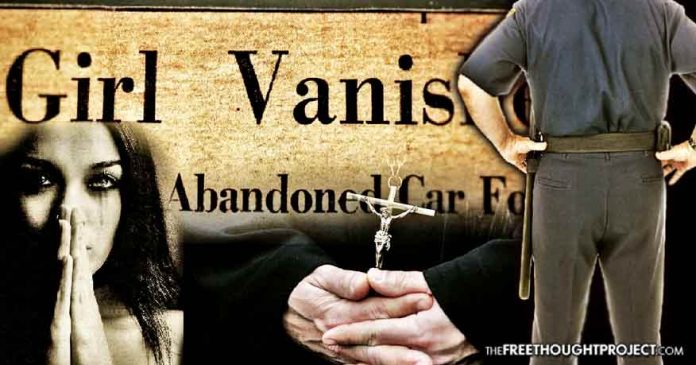 Baltimore, MD — Baltimore police have found themselves in an awkward position as of late after a horrifying documentary from Netflix exposed a dark underground child sex ring involving the church, politicians, and cops. The series, titled, The Keepers, has forced the Baltimore police to set up an online submission form as people began to come forward after watching it.

While the series is on Netflix for the world’s entertainment, the harsh truth is that it really happened. After the church attempted to keep it quiet by paying off the victims under the table, the documentary has exposed these monsters to the world.

The seven-part documentary series, which premiered on Friday, also covers the unsolved murder of one of the teachers, Sister Catherine Ann Cesnik. On Tuesday, enough former victims had seen the documentary that they began calling the Baltimore police department to report their abuse.

Baltimore Police have since made an online submission form available for those who would want to report any instances of sexual abuse related to the series.

“We have been contacted by victims from the past who want to report the sex offenses that occurred to them. The murder investigation related to this Netflix series was handled by the Baltimore County Police Department,” the website reads.

The Baltimore Police Department has created an online submission form for sex offenses related to the Netflix series,…

Posted by Baltimore Police Department on Tuesday, May 23, 2017

Dozens of victims had been suppressing the memories of their abuses and when this documentary came out, it brought the nightmares right back. Originally, many people thought the first woman to come forward was ‘faking’ it, until dozens more followed suit.

Baltimore police spokesman T.J. Smith said to the Washington Post after the series was released, “We’ve heard from people who previously hadn’t reported their offense. We just wanted to streamline the process. This is a crime that occurred to them, they don’t need to constantly relive the nightmare, telling the story over and over again.”

As the Post reports, Smith said he did not know how many calls his department had received but noted that victims in the case were probably teenagers at the time, and “this is bringing back memories for them. We just wanted to cut out the middleman and want to route them directly where they need to go.” He said sex crimes detectives will receive the online submissions and reach out to anyone who believes they were victimized.

Conveniently absent from the coverage of this Netflix series on the Washington Post and other mainstream outlets, however, is the fact that the victims in this documentary have implicated politicians as well as the police in these most unspeakable crimes.

“We never set out to solve the murder,” director Ryan White says of his new Netflix docuseries, to Vanity Fair. The seven-episode show explores the 1969 disappearance and murder of Sister Cathy Cesnik, a 26-year-old nun and beloved English teacher at Baltimore’s all-girls Archbishop Keough High School. Still, White knew this was no ordinary crime: “The truth had been deliberately buried from the beginning,” he says. Indeed, what begins as an investigation into a cold case soon becomes the story of a concerted effort to conceal widespread rape and sexual abuse committed by Keough school chaplain and counselor Father Joseph Maskell, as well as other clergy, police, and a local gynecologist.

Because, Maskell, the monster behind this widespread rape and abuse, was well-connected int the political realm, he brought others into his sick ring to prey on these young girls.

Maskell’s brother was a high-ranking city cop. This connection had two facets. First, it allowed him to cover up their crimes using these police connections. Second, it allowed for these depraved police officers to enter into this dark child sex ring.

According to Jean Wehner, the woman at the center of the abuse, Maskell operated this sex abuse ring, bringing in outside men — many of them police officers and local politicians — to take part in the abuse.

When Wehner confessed the abuse to Sister Cathy Cesnik, Cesnik became determined to put a stop to it. However, that is exactly what got her murdered.

The good news is that this paradigm seems to be shifting. As we reported in March, even some brave folks within the mainstream media have begun to report on this nightmarish reality.

In an exclusive interview seen by millions across the United States, Dr. Phil exposed the deadly secretive, and the highly organized world of elite pedophilia — with a former child sex slave going by the name of “Kendall” describing being literally born into, and growing up in, the world of elite sexual slavery.

Kendall explains that she was born to be a sex slave, as her parents intentionally had her for the trafficker she calls her “owner.” Kendall says that her parents sold her at birth to an elite pedophile ring that serviced some of the world’s power elite, describing her first memories as being passed around groups of rich and prominent men and women for them to “take turns” with her for sadistic sexual pleasure.

While Netflix and Dr. Phil have done a huge service to society by exposing this reality, we have a long way to go to end it. Pedophilia and child trafficking is a very real issue and those who attempt to discredit it and sweep it under the rug are either horribly incompetent or complicit.

This problem will not go away through ridicule and name calling. We must shine light into the darkness through refusing to be silenced. We must stand for those who are too scared to come forward and we must be the voice for the voiceless. Please share this story with your friends and family so that they may see the real horror of what goes on behind the well-connected political scenes in this country. Until enough people become aware, none of this will end.