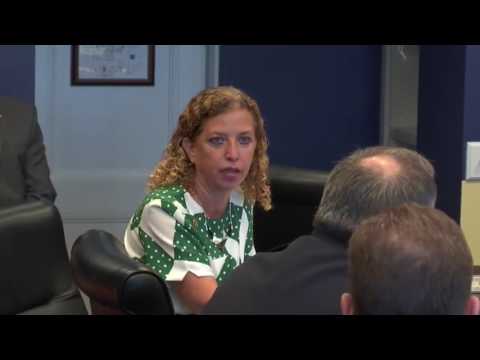 (INTELLIHUB) — In an absolutely outrageous and transparent abuse of authority, former DNC chairwoman Rep. Debbie Wasserman Schultz used her position on a committee that sets the police force’s budget to not only attempt to undermine an active investigation but also to directly threaten the chief of the U.S. Capital Police.

During the hearing, Schultz spent nearly three minutes grilling the police chief over the confiscation of a laptop that is connected to an active investigation, going as far as trying to extract a promise that the computer would be returned, a move that if allowed to happen would surely hinder the criminal investigation.

After being told that the laptop was a key piece of evidence in the investigation, Schultz then preceded to publicly threaten the police chief!

“I think you’re violating the rules when you conduct your business that way and you should expect that there will be consequences,” the top Democrat told Police Chief Matthew R. Verderosa.

The computer in question is being held by police in order to build a case against one of her staffers, Pakistani Imran Awan, who is suspected of being involved in a massive cybersecurity breach that includes “funneling sensitive congressional data offsite.” Awan is also accused of billing the government four million dollars for work that was never actually conducted.

“A federal employee with knowledge of the situation and who requested anonymity told The Daily Caller News Foundation’s Investigative Group that as House authorities closed in on Imran Awan and his brothers, a laptop used by Imran was hidden in an unused crevice of the Rayburn House Office Building. Wasserman Schultz’s office is in Longworth House Office Building, a separate structure,” reported The DCNF.

Danny Gold of Liberty Writers also noted that, “When the situation became clear, the police confiscated a laptop from the former IT worker. That laptop TECHNICALLY belongs to Schultz’s campaign.”

“Also strange was that Politico described the relationship between Schultz and Awan as a “friendly personal relationship.”

When you consider how vile and openly criminal Wasserman Schultz was willing to be in a public hearing, one has to wonder if she is actually involved in the accused crimes herself. At the very least we now know she is actively trying to interfere in the investigation.

The Daily Caller report also noted that Wasserman Schultz refused to answer any questions about her disgusting actions at the hearing, immediately turning around to go back into the office she had came out of before being asked why she wouldn’t want the Capital Police to have all the evidence they need to build a criminal case.

This is a clear cut 100% example of corruption at the top of the Democratic Party that not only needs to be further investigated on its own but should also lead to a new investigation into why the former DNC chairwomen would want to directly protect accused Pakistani criminals.

You can read the entire transcript of the conversation below: (Courtesy of the Daily Caller)

DWS: I’d like to know how Capitol Police handle equipment that belongs to a member or staffer that’s been lost in the Capitol complex and found or recovered by one of your officers. What happens?

Chief: It’s processed on a PD-81 which is a property record, and depending on the property, depending on how you can legitimately determine ownership, it’s generally turned back over to the owner of a property. If it’s part of an ongoing case, then there are other things that have to occur for that to happen.

DWS: So if a member says there is equipment that has been lost, and you find it it would be returned to the member?

Chief: In a general sense, yes. You have to be able to positively identify the property and be able to establish ownership.

DWS: If ownership is established…

Chief: If it’s part of an ongoing case, then there are additional things that need to be done.

DWS: But if a member owns the equipment, and there is no ongoing case related to that member, then the equipment is supposed to be returned.

Chief: In a general sense, yes.

DWS: No, I mean in a specific sense. If the member loses the equipment, says they lose the equipment, and it is found by the Capitol Police, it is supposed to be returned.

Chief: If ownership has been established, it will be returned. If it’s subject to an ongoing investigation, there are additional things–

DWS: OK, but not an ongoing investigation related to that member. If the equipment belongs to the member, it has been lost, they say it’s been lost and it’s been identified as that member’s, then the Capitol Police are supposed to return it.

Chief: I can’t give a yes or no answer on that, because I know–

DWS: It’s a simple yes or no answer. If a member loses equipment and it is found by your staff and identified as that member’s equipment and the member is not associated with any case, it is supposed to be returned. Yes or no.

Chief: It depends on the circumstances.

DWS: I think you’re violating the rules when you conduct your business that way and you should expect that there will be consequences.

Alex Thomas is an opinion journalist and editor f0or Intellihub News. He was a founding member of what later became Intellihub.com and an integral part of the team that destroyed the mainstream media blockade on Bilderberg in 2012. You can contact him here.