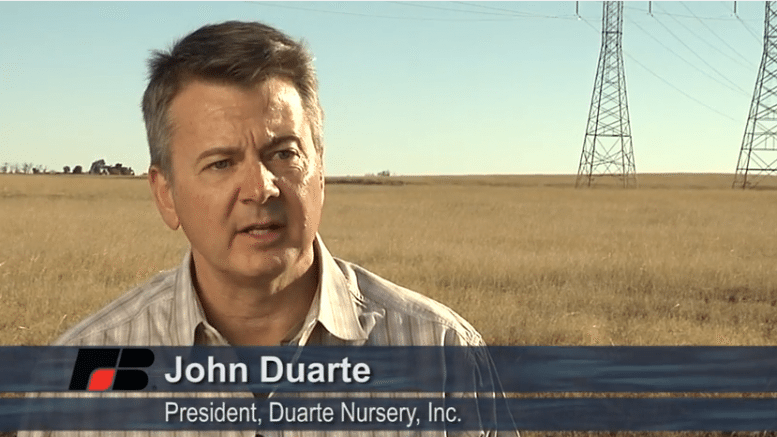 A California farmer is facing $2.8 million in fines for plowing his field and planting wheat without a permit.

John Duarte of Duarte Nursery is David going up against Goliath, just like ranchers, farmers and natural health product makers. His case could set a dangerous precedent that would require farmers to obtain expensive and time-consuming permits from the US Army Corps of Engineers before planting crops.

“The case is the first time that we’re aware of that says you need to get a (U.S. Army Corps of Engineers) permit to plow to grow crops,” said Anthony Francois, a lawyer for the Pacific Legal Foundation. “We’re not going to produce much food under those kinds of regulations.”

However, U.S. District Judge Kimberly J. Mueller sided with the Army Corps last June, in which the US Attorney’s Office is asking for $2.8 million in civil penalties.

Why? Who was harmed? What real and actual crime took place?

USA Today has the background of the story that began in 2012 when Mr. Duarte planted wheat on land that he bought with his own money, some 450 acres.

Because the property has numerous swales and wetlands, Duarte hired a consulting firm to map out areas on the property that were not to be plowed because they were part of the drainage for Coyote and Oat creeks and were considered “waters of the United States.”

Francois conceded that some of the wetlands were plowed but not significantly damaged. He said the ground was plowed to a depth of 4 to 7 inches.

The Army Corps did not claim Duarte violated the Endangered Species Act by destroying fairy shrimp or their habitat, Francois said.

This particular freshwater species is unique to California and southern Oregon and has been classified as a threatened species since 1994 because much of its wetlands in California’s Central Valley were converted to cropland or became urban.

Duarte’s wheat was planted but not harvested because in February 2013 the Army Corps of Engineers and the California Central Valley Regional Water Quality Control Board issued orders to stop work at the site. The agencies claimed Duarte had violated the Clean Water Act by not obtaining a permit to discharge dredged or fill material into seasonal wetlands considered waters of the United States.

Duarte sued the Army Corps and the state, alleging they violated his constitutional right of due process by issuing the cease and desist orders without a hearing. The U.S. Attorney’s Office counter-sued Duarte Nursery to enforce the Clean Water Act violation.

The government claims that Duarte did not plow but rather used a ripper, which dug 10 inches into the soil and they allege that it disturbed portions of the property that included wetland areas.

“Even under the farming exemption, a discharge of dredged or fill material incidental to the farming activities that impairs the flow of the waters of the United States still requires a permit because it changes the chemical, physical and biological integrity of the waters,” the U.S. attorney said in court filings.

Francois claims the penalties are unfair because his client believed the plowing exemption allowed him to till the soil.

“A plain reading of the rules says you don’t need a permit to do what he did,” Francois said. “How do you impose a multimillion penalty on someone for thinking the law says what it says?”

Indeed, but even more to the point, what business does the government have telling a man whether or not he can plow or not on his own land? This is not about wetlands and animals or rivers. This is about controlling people and their property. I wish people would wake up to what is taking place in this country with regards to central government controlling land and imposing heavy regulations on private property.