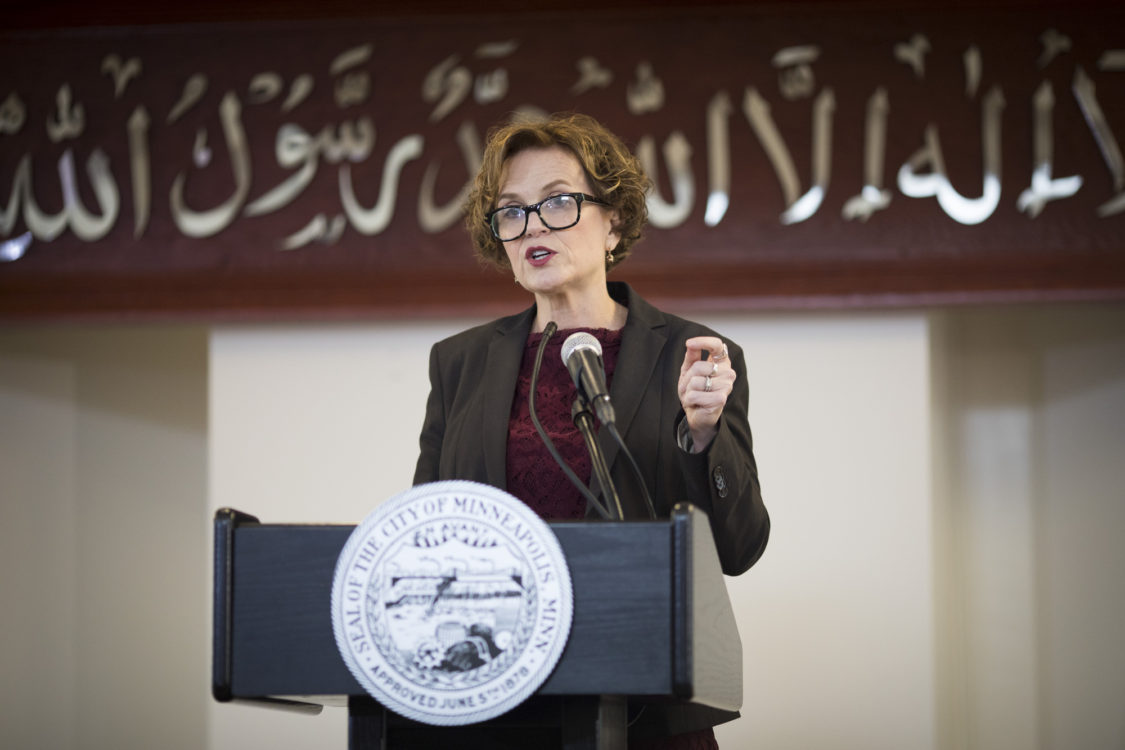 On Tuesday, just one day after an Islamic jihadi blew himself up at an Ariana Grande concert in Manchester, which killed 22 and wounded 64, Minneapolis Mayor Betsy Hodges gave her State of the City address from a mosque and called for unity and solidarity with the Muslim community.

One might take a step back and wonder if this woman is sane or not. To take this kind of action one day after an Islamic attack and purposefully go to a mosque and cover for Islam is reprehensible. Still, she did it.

“Minneapolis, our shell is cracked. And from that will come the full flower of our potential, whatever we are destined to be,” Hodges said at Masjid An-Nur (Mosque of the Light). “To some, who can only see this moment, it may indeed look like complete destruction. In reality, it is transformation.”

Minneapolis Mayor Betsy Hodges is set to give the State of the City address at a mosque on the north side of the city.

No, it’s complete destruction, she just doesn’t have a clue of the savages she is incubating there. In fact, we reported on that in 2013, just a few months before she took office.

Hodges seems clueless about what Islam is or teaches and as such, like a good little totalitarian, she sides with those of like mind. In fact, she took aim at the Trump administration for its open talk about Islamic terrorism and wanting to put a stop to it.

“We stand with our Muslim community, as President Trump singles them out for attack and unfairly-targeted policy,” she said, indicating that she wanted to signal to the community that follows the terrorist Muhammad that she and the city stands with them.

“When Donald Trump comes after any part of our community, he’ll find 419,000 Minneapolitans and me standing squarely in his way,” she said. “That’s the kind of wall I can support.”

I’d love to see how many people would be standing with her if that day should come. I’m guessing not many.

Pete Hedseth, former CEO of Concerned Veterans for America, confronted the Mayor on her comments.

WATCH: @PeteHegseth confronts Minneapolis mayor who bashed President Trump during 'state of the city' speech in a mosque pic.twitter.com/CqtxpMji6m

He asked the mayor why she held the SOTC speech in a mosque, and would she give that speech in a church. He then challenged her with what her ideological alignments present as “separation of church and state,” which is not in our Constitution.

“I did it in a mosque today because our Muslim community needs support,” she answered.

He then asked if she thought it was a conflict with that ideology of “separation of church and state.”

“No,” she said. “I have given official speeches in churches before.”

However, she has not given a State of the City speech there, not that Christian Churches should allow such people to speak from their pulpits anyway.

The one thing we do know is that Christians don’t engage in what Islamic jihadis do. They don’t go blowing themselves up in order to enter Paradise and obtain virgins to indulge themselves with and they don’t do it in the name of a false god or walk in the footsteps of a murdering, thieving pedophile named Muhammad.

The mayor continued to cover for Islam following that exchange.

“Our Muslim community needs a lot of support right now because one community should not be held responsible for the reprehensible acts of a few members of that community,” she said.

This is a serious problem. The Koran teaches the faithful to carry out those “reprehensible acts,” and there is a clear 1,400-year track record to demonstrate that the Islamic community, those who actually believe the Koran, are firmly behind Islamic terror. However, in the end, all Islamists benefit to some extent from jihad attacks.

Hegseth did point out that the mayor didn’t call on the Muslim community, which is growing and is recruiting Islamic State members as we saw above, to root out those who are devout and have their allegiance to Islam, including jihad terror.

“You do a good job of that Pete,” she said with a smirk on her face.

That smirk indicates one of two things, she knows exactly what she is doing and will not engage in accountability to the public for her treasonous views of supporting Islam, or she is totally ignorant of what Islam actually teaches and just buys into the notion that there are just a few “radicals” in the bunch.

Islamists, like Communists, should not be welcome in the united States of America and continue to practice their death cult religion. We have laws, based on biblical law, which are supposed to be used to bring justice on those who would seek to tear down our the foundations of our Christian heritage in this land.

Our Constitution also provides the means of stopping the Islamization of America, if only we would use it.

Mayor Hodges is only helping to bring a curse on the people she serves by holding hands with anti-Christ Muslims (1 John 2:18, 22; 4:3; 2 John 1:7). They need the Gospel, not coddling and support. Doing so will only breed more vipers that are sure to be even deadlier that the Manchester jihadi.

Finally, she made reference to gun violence and we all know where that leads, gun confiscation. Be aware of how the Bible tied an unarmed people and foreign gods together.

They chose new gods; then was war in the gates: was there a shield or spear seen among forty thousand in Israel? -Judges 5:8