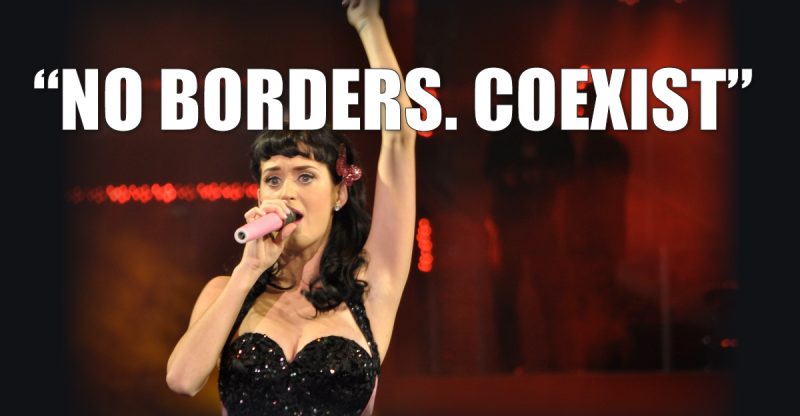 “No Barriers, No Borders, We all need to co-exist.” –Katy Perry

This week, headline news read, “MASSIVE Explosions” Rock British Concert… Bodies Everywhere… Fatalities Confirmed… “It Was Huge-You Could Feel it in Your Chest.”

Yet, in London, we know that Muslim Mayor Sadiq Khan told New York and London, “Terror attacks are a part of urban life.”

In America, Minneapolis Mayor Betsy Hodges begins her little scripted diatribe on cue supporting those who follow the teachings of the Koran, all the while, overlooking the victims. This is all brought to you by your local, corrupt and treasonous politicians (Article 3, Section 3 of the US Constitution).

Here you see them using divide and conquer to gain control of the chaos that politicians and the media are allied in creating (Mark 3:25).

We see these officials act rather strange after these “terror attacks.” They seem to conglomerate on cue and ally themselves to condemn the acts, but not the actors. In the end, they ask the people to give up their rights while attempting to disarm them for the “global good.” Additionally, they attempt to forge new powers against the very people they are supposed to represent.

When are Americans going to figure out that this is a global initiative? This leads us to ask who the real terrorists are. They are nothing but an allied group of “useful idiots,” which will be disannulled (Isaiah 28:18).

Terror was originally defined in Oxford English Dictionary as:

Notice how Hollywood, the media, the music industry and corrupt government are all pushing forth the same initiative.

After the terror attack in Britain, Katy Perry pipes up in her ignorance and stated after the attack, “No barriers, no borders. We all need to co-exist.”

Katy wants the world to co-exist. I say, “You first, Katy!”

Ironically, in a display of hypocrisy, Katy Perry has a gated entrance to her mansion, which is located in a guarded community.

The reason there is war in the gates is because men have left serving the One, True God and followed after other gods, which is idolatry (Exodus 20).

Ariana Grande, whose concert was interrupted by the Islamic terrorist this week, claims to be a representative of America in Britain said, “I hate Americans, I hate America!” She went on to say on another occasion, “Islam is love!”

Yet, she is in a country that is disarmed by their government while being subjected to a foreign enemy without and overtaken by those who are committing the acts of terror, but continues her rhetoric (Romans 1:22).

People actually pay money to listen to this filth from an uneducated, indoctrinated fool that thinks that she is a representative of the American people.

Are these America’s representatives? Are these the real lawless legislators to the up and coming generation who are being used to change the laws of society? (Psalm 94:20) You better know that they are (Isaiah 14; Ezekiel 28:12-13)

Celebrities are The Real Legislators!