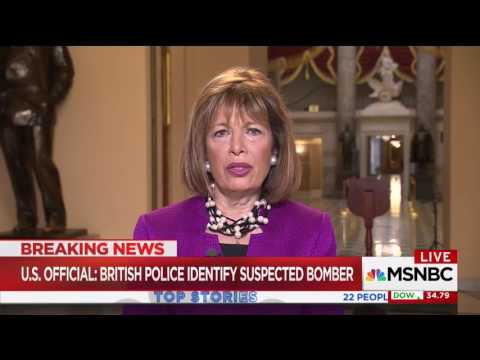 For the Democrats, Muslims are always the victims, no matter what, no matter how many people jihadis kill for Allah. Their knee-jerk reaction after every jihad attack is to blame the victim, as Jackie Speier does here: it’s all the fault of the kuffar, you see, because Muslims feel “isolated.” Never mind that Britain has bent over backwards to appease Muslim groups and make Muslims feel welcome. Each new jihad attack is evidence that they’ve failed and that more accommodation is needed — until there is no more accommodation possible and sharia is fully implemented.

“Speier: Muslim Youths Could Become So Isolated That Violence Becomes ‘Only Avenue of Making a Statement About Their Religion,’” by Cameron Cawthorne, Washington Free Beacon, May 24, 2017:

Rep. Jackie Speier (D., Calif.) said Tuesday on MSNBC that Muslim youths could become so isolated that violence becomes the “only avenue of making a statement about their religion.”

Speier’s comment came after host Stephanie Ruhle asked her about the terrorist attack Monday night following an Ariana Grande concert in Manchester, England that killed 22 people and wounded over 50 others, including many children.

“ISIS has now claimed responsibility,” Ruhle said. “Is there any evidence you’ve heard to back that up?”

Speier said there was no evidence at the time to link suspected suicide bomber Salman Abedi to the Islamic State. She then discussed how many of the recent terror attacks have been lone-wolf acts of violence that ISIS likes to take credit for.

“The real issue is whether or not Muslim youth around the United States and around the world feel there’s a pathway forward for them, or do they become so isolated that this is their only avenue of making a statement about their religion,” Speier said.

Since Speier’s interview on Tuesday morning, British authorities have confirmed that Abedi was part of a terrorist network, not a lone-wolf attacker, according to NBC News….