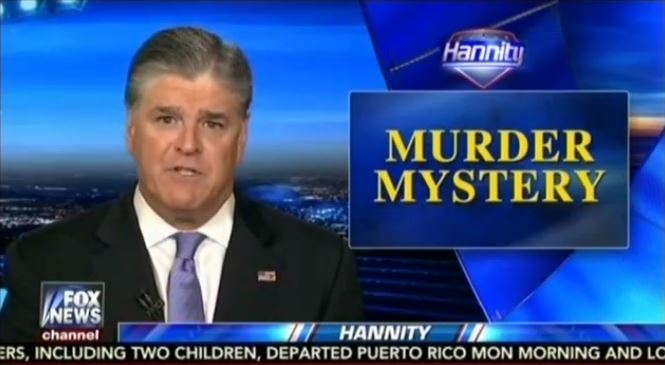 (INTELLIHUB) — Over the last several weeks we have seen a massive corporate media operation targeting anyone who dares to cover the possible connection between hacked DNC emails, Wikileaks, and the murder of Seth Rich.

The media, with help from leftist groups like Media Matters, has gone into overdrive attacking any news outlet or reporter that even considers the possibility that Rich was murdered because he was the person who gave the emails to Wikileaks in the first place.

Now, one of the more prominent voices who have questioned the official story may soon pay for it with his job.

According to a report by independent journalist Joe Biggs, a source close to Hannity has revealed that the popular Fox News host will be fired sometime next week as a result of his coverage of the Seth Rich conspiracy.

“I had a conversation with a source close to Hannity who showed me an internal email at fox where Adam Housley spoke to Sean and he said he believes he will be fired next week sometime by Fox News for his coverage of the Seth Rich murder,” reported Biggs.

The report also claims that a source within the FBI may soon provide documents that prove that Rich was indeed in direct contact with Wikileaks.

If Hannity is fired it would prove once again that the entire establishment is unbelievably scared about the real details surrounding the horrific death of Rich and essentially wants the entire story squashed for good.

Stay tuned as Intellihub will continue to cover the Seth Rich murder story regardless of any threats or attacks by the deep state shills throughout the media.

Alex Thomas is an opinion journalist and editor f0or Intellihub News. He was a founding member of what later became Intellihub.com and an integral part of the team that destroyed the mainstream media blockade on Bilderberg in 2012. You can contact him here.