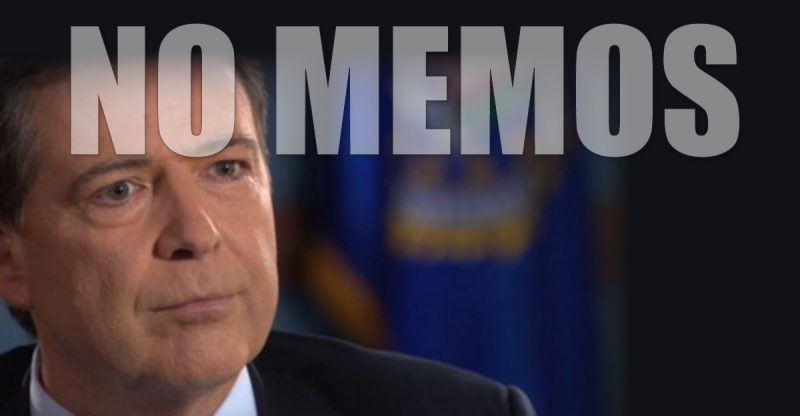 A couple of weeks ago the House Oversight Committee sent a letter to the FBI asking to see the memos kept by former FBI Director James Comey that supposedly said that the President had tried to get Comey to “go easy” on former National Security Advisor Michael Flynn. No one has ever seen the memos, but some pro-Comey, anti-Trump voices have argued that they prove the President tried to strong-arm Comey’s Russia investigation. The only problem is that it flies in the face of public comments that Comey made saying the opposite. It also begs the question, why wouldn’t Comey have come forward about such a thing sooner?

Whatever the case, Congress wants to see the memos for themselves instead of relying on the media’s anonymous sources.

With that in mind, Committee Chairman Jason Chaffetz asked that his committee be provided with the memos as they continue their investigation into the Russia mess.

On Thursday, the FBI refused to supply Congress with those memos.

In a letter to Oversight Chairman Jason Chaffetz (R-Utah), the FBI’s assistant director for congressional affairs, Gregory Brower, said the bureau can’t provide the memo until it consults with Robert Mueller, the new special counsel overseeing the investigation into Russia’s election meddling.

In light of Mueller’s appointment “and other considerations,” Brower wrote, “we are undertaking appropriate consultation to ensure all relevant interests implicated by your request are properly evaluated.” Brower pledged to update the Oversight panel “as soon as possible.”

Chaffetz responded almost immediately explaining that while he understood the position the FBI was in, they needed to understand that Congress was running its own investigation and the FBI needed to comply as quickly as possible. Chaffetz also explained that the FBI could most certainly supply the documentation that was not germane to Special Counsel Mueller’s investigations.

Mueller’s mandate is specific: to conduct the investigation Corney confirmed in his testimony before the House Permanent Select Committee on Intelligence.4 This includes investigating “any links and/or coordination between the Russian government and individuals associated with the campaign of President Donald Trump” as well as any matters that arise from the investigation or other related matters such as perjury, destruction of evidence, or obstruction of justice. 5

The Committee’s authority is not similarly constrained. Congress does not conduct criminal or counterintelligence investigations; rather Congress’s power of inquiry is rooted in part in its duty to oversee the Executive Branch’s faithful enforcement of the laws that Congress enacted. 6 In this case, the focus of the Committee’s investigation is the independence of the FBI, including conversations between the President and Corney and the process by which Corney was removed from his role as director. The records being withheld are central to those questions, even more so in light of Corney’s decision not to testify before the Committee at this time…

Chaffetz also outlined the specific documentation that the FBI could provide and that he expected them to provide as soon as possible.

Toward that end, provide all of the following documents that are outside the scope of the Special Counsel’s investigation as soon as possible, but no later than June 8, 2017:

1. All memoranda, notes, summaries, and recordings referring or relating to any communication between James B. Corney and any White House employee, including the President and the Vice President, since September 4, 2013; and

2. All memoranda, notes, summaries, and recordings referring or relating to any communication between James B. Corney and the Attorney General or the Deputy Attorney General, since September 4, 2013.

In addition, identify all documents responsive to items one or two, regardless of whether the document is within the scope of the Special Counsel’s investigation.

With all of the ongoing leaks, it’s easy to understand why the FBI would be reticent to provide Congress with classified material, but it’s a risk that they really do have to take. This Russia fiasco has gone on long enough and while the Democrats keep saying that there is evidence of “collusion,” no one has EVER provided the public with any such information. While the Comey memos wouldn’t be a “smoking gun” in either direction they could at least prove that some of the media’s sources have been bad or that the President may have been throwing his weight around with Comey.

Either way, more information is better in this situation.