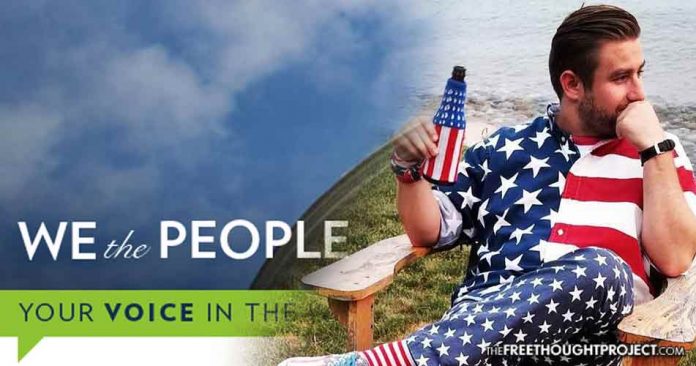 With the former Speaker of the House, Newt Gingrich asking questions about the bizarre killing of a Democratic National Committee (DNC) staffer in 2016, the murder mystery surrounding Seth Rich has taken an interesting turn. A White House Petition has been started demanding President Trump appoint a special prosecutor to find his killer.

It is important to note that those of us asking for an investigation into the death of Seth Rich, are not some tinfoil nutjobs as the mainstream media attempts to claim. Since when is wanting justice for a murder ‘conspiracy theory’? No one at the Free Thought Project has ever attempted to claim to know who killed Seth Rich, we simply want an investigation. And, since this petition has gone viral — it appears that a lot of other Americans want the same thing.

When Rich was killed in 2016, Wikileaks Founder Julian Assange called for an investigation into the homicide. Why would a wanted man, holed up in an Ecuadorian embassy in London care at all who killed the Washington, DC-based staffer? That question remains unanswered but some believe he was the source of the DNC database of emails which, arguably, cost Hillary Clinton the 2016 presidential election.

Now, a petition has been created to force the president’s hand to open an official investigation, called, “WE THE PEOPLE ASK THE FEDERAL GOVERNMENT TO CALL ON CONGRESS TO ACT ON AN ISSUE.” The petition is asking the president to, “Appoint a Special Prosecutor to investigate the murder of Seth Rich, the alleged Wikileaks email leaker.” The petition was created by someone only known as “J.F.” on May 19, 2017. Already, over 25,000 signatures have been obtained of the needed 100,000, requesting the White House to open an official investigation into his killing. The petition reads;

On July 10, 2016, Seth Rich was shot twice in the early morning as he walked back to his house in Washington D.C. Immediately after the crime, the death was called an armed robbery… but none of Seth Rich’s belongings were taken from hiM.

Rod Wheeler, a private investigator hired by the family, said that there was evidence Seth Rich had contacted WikiLeaks and that law enforcement were covering this up. MSM is not covering this murder, instead pushing it to the side, so it is now up to us.

The facts do not add up, law enforcement stopped covering the crime, and now it is time for us to fight for justice. Seth Rich deserves this.

While the mainstream media appears to consider the matter of Seth Rich a murder driven by motives of armed robbery, the alternative media is camping out on the issue, refusing to let his name, and his possible contribution to transparency disappear. If the rumors were true Rich was the DNC mole, who leaked the database of emails to Wikileaks, he would likely have been targeted for discreditation, but, instead, he was found with gunshot wounds to his back, clinging to life, and later died from his injuries.

According to One America News, which is offering a $100,000 reward for information leading to the arrest of his killer, members of Congress are now beginning to question whether or not Rich’s death may have been an inside job. Rep. Dana Rohrabacher (R-California) told OAN, “Whoever it could be, we need to look into it and verify. The fact that the young man’s death has not been followed by an investigation that would even be in place for an ordinary murder is very suspicious to me.”

Rep. Blake Farenthold (R-TX) told OAN, “I think it should definitely be a part of the investigation. It’s an alternative theory and any good investigation looks at alternative theories…We need to investigate all the options. A lot of the allegations about Russia and some of the allegations about President Trump now are all coming from un-named sources. Sources suggesting it was an inside job are probably just as valid as somebody not willing to give their name.”

OAN’s Pearson Sharp concluded, “Solving this case could reveal important clues into the 2016 election and how high up corruption at the DNC really went. DNC officials have long pushed the views that Russia was behind their email leak, but this latest information casts doubt on those claims.”