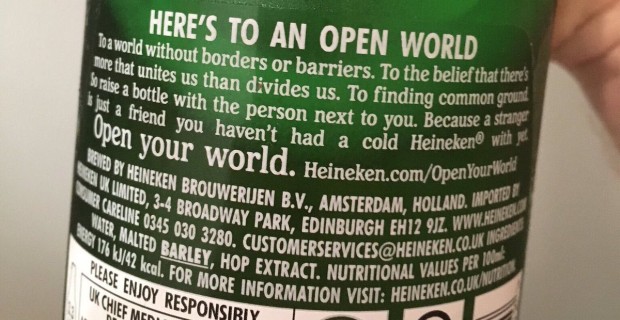 A new ad campaign for Heineken beer promotes “a world without borders or barriers,” in another nod to the vacuous virtue-signaling that is being embraced by many top companies.

Text has been added to cans of Heineken that states, “Here’s To An Open World. To a world without borders or barriers. To the belief that there is more that unites us than divides us. To find common ground to raise a bottle with the person next to you. Because a stranger is just a friend that you haven’t had a cold Heineken with yet. Open Your World.”

The campaign is backed up with a commercial in which leftists and conservatives “divided by their beliefs” come together to make peace. The commercial isn’t that bad, but the “world without borders” gimmick is painfully bad.

One wonders if the idiot who came up with the slogan thought for 5 seconds about what a “world without borders” would actually look like given that half of the third world (along with a generous smattering of Islamic terrorists) would love to see a borderless planet.

But facts, logic and reality don’t matter when you’re pandering to people who think that singing John Lennon’s “Imagine” and tweeting hashtags will stop jihadist attacks.

While Heineken has thrown its lot in with globalism, on Memorial Day we’ll be drinking Budweiser – which last year ran a campaign which included changing the name on its beer to “America” to celebrate shared values of “freedom and authenticity”.