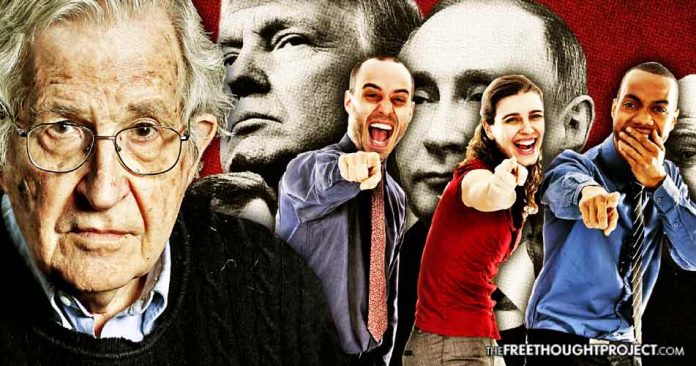 Americans are being played like a fiddle by the mainstream media. Most of the world knows it, yet much of America remains entirely oblivious to the fact that there has yet to be a single shred of concrete evidence proving anything about Russiagate.

World-renowned academic and leftist intellectual giant, MIT professor Noam Chomsky, has historically been hostile to establishment power and privilege – literally writing the book about how consent is manufactured using media to support an elite-driven policy agenda.

Thus, Chomsky’s words should be taken extremely seriously when he recently referred to news stories being pushed in the mass corporate media, about Trump-Russia “collusion,” as little more than “a joke.” In fact, he says that this neo-McCarthyist/anti-Russia propaganda degrades one of the positive aspects of the Trump administration – a drive to reduce hostility with rival nuclear power Russia.

Over the years, Chomsky has refined what he calls, the ‘propaganda model’ of the corporate mass media. He posits that not only does the media systematically suppress and distort, but when they do present facts, the context obscures the actual meaning. In essence, the mass media uses brainwashing to keep people subservient to large corporate interests.

During a panel discussion with Chomsky on Democracy Now, one of the panelists referenced Chomsky’s commentary on the Trump/Russia collusion being “a joke,” and asked him,

“Could you give us your view on what’s happening and why there’s so much emphasis on this particular issue?”

Chomsky, the author of more than 100 books, including “Manufacturing Consent: The Political Economy of the Mass Media,” in which he breaks down how U.S. corporate media has been weaponized as a means of controlling public opinion by propagandizing the American people, didn’t mince his words, noting:

“It’s a pretty remarkable fact that — first of all, it is a joke. Half the world is cracking up in laughter. The United States doesn’t just interfere in elections. It overthrows governments it doesn’t like, institutes military dictatorships.”

“Simply in the case of Russia alone—it’s the least of it—the U.S. government, under Clinton, intervened quite blatantly and openly, then tried to conceal it, to get their man Yeltsin in, in all sorts of ways,” said Chomsky. “So, this, as I say, it’s considered—it’s turning the United States, again, into a laughingstock in the world.”

“So why are the Democrats focusing on this?” he said. “In fact, why are they focusing so much attention on the one element of Trump’s programs which is fairly reasonable, the one ray of light in this gloom: trying to reduce tensions with Russia? That’s—the tensions on the Russian border are extremely serious. They could escalate to a major terminal war. Efforts to try to reduce them should be welcomed.”

“Just a couple of days ago,” said Chomsky, “the former U.S. ambassador to Russia, Jack Matlock, came out and said he just can’t believe that so much attention is being paid to apparent efforts by the incoming administration to establish connections with Russia.” He said, ‘Sure, that’s just what they ought to be doing.’”

Continuing, Chomsky said, “So, you know, yeah, maybe the Russians tried to interfere in the election. That’s not a major issue. Maybe the people in the Trump campaign were talking to the Russians. Well, okay, not a major point, certainly less than is being done constantly.”

“And it is a kind of a paradox,” he said, “that the one issue that seems to inflame the Democratic opposition is the one thing that has some justification and reasonable aspects to it.”

One need to look no further than the Washington Post to understand how U.S. media frequently serve as an errand boy for U.S. corporate, military and imperial interests. Unsurprisingly, Jeff Bezos, owner of WaPo, is deeply connected to U.S. intelligence/security services, as the holder of a $600 million dollar CIA contract.

As the Nation reported at the time:

“[Jeff Bezos] recently secured a $600 million contract from the CIA. That’s at least twice what Bezos paid for the Post this year. Bezos recently disclosed that the company’s Web-services business is building a ‘private cloud’ for the CIA to use for its data needs.”

Although these connections aren’t enough to prove nefarious collaboration outright, these anomalous relationships seriously call into question the validity of a newspaper that claims to be a paper of national repute.

Moreover, history reveals actual collusion between the CIA and numerous news outlets, including the Washington Post, under a covert program, called Operation Mockingbird, to influence public perceptions by infiltrating newsrooms across America.

In 1977, a former Post journalist, Carl Bernstein, exposed the CIA’s clandestine efforts to infiltrate and subvert the news media, often with the knowledge and assistance of top management at these journalistic outlets. In total, Bernstein reported, over 400 journalists were reportedly involved:

“Journalists provided a full range of clandestine services—from simple intelligence gathering to serving as go-betweens with spies in Communist countries. Reporters shared their notebooks with the CIA. Editors shared their staffs. Some of the journalists were Pulitzer Prize winners, distinguished reporters who considered themselves ambassadors without portfolio for their country…In many instances, CIA documents show, journalists were engaged to perform tasks for the CIA with the consent of the managements of America’s leading news organizations.”

Make no mistake that the U.S. mainstream corporate media has been weaponized as a means of controlling public opinion, by propagandizing the American people into believing a false reality, or propaganda model, which serves the plutocratic oligarchy. According to Chomsky, Russiagate is the fake news you have been warned about!