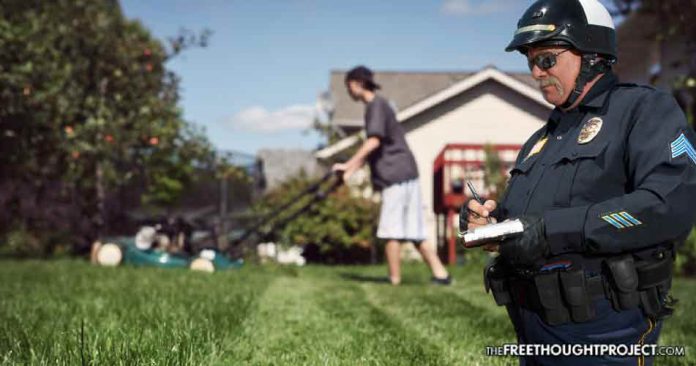 Gardendale, AL — A regular summer right of passage for motivated teenagers across the United States in search of some extra spending money has always been cutting the neighbors grass. However, teens in Gardendale, Alabama, and many other cities across the United States, are about to get a rude lesson in how government overregulation stifles personal and financial growth.

Local officials and area law services have reportedly warned area teens that without a business license issued by the city, which costs $110, they are in violation of a city ordinance, thus violating the law, if they attempt to cut grass without a license.

It’s patently absurd that local teenagers can’t make a private agreement with a neighbor to mow a lawn without the government sanctioning the transaction by inserting themselves as the arbiter of who is allowed to legitimately cut grass.

Mowing grass in the summer is often one of the first jobs a motivated teenager will engage in during their summer break from school. But, with a business license costing $110 for a job that will likely be ongoing for a few short months in the summer, the cost will likely drive many ambitious entrepreneurial teens away from what would likely be a rewarding experience.

“I have never heard of a child cutting grass having to have a business license,” Elton Campbell, whose granddaughter, Alainna Parris, mows a few lawns around the neighborhood, told ABC-33/40.

The teen is disappointed as she felt like this was the perfect way for her to make some extra money during the summer.

“Just helping out and raising money for admissions and trips,” said Alainna Parris.

According to Campbell, Parris is allegedly being targeted by someone upset by the competition from the teen. That person is using the power of the state to eliminate his competition.

“One of the men that cuts several yards made a remark to one of our neighbors, ‘that if he saw her cutting grass again that he was going to call Gardendale because she didn’t have a business license,’” said Campbell.

Campbell called out the irony of trying to prevent a child from taking on a summer job, when they show an internal drive and take the initiative, as so many teenagers are not engaging in enterprising behavior, or taking on additional responsibilities, during their summer break.

“He’s coming after a kid when a kid is at least trying to do work. There’s kids at home on iPads and electronics and not wanting to go outside,” said Parris.

Mayor Stan Hogeland weighed in on the controversy, noting that when operating a business for pay within the city limits, you must have a business license. But, he also said that sending law enforcement after a child trying to earn extra money in the summer is not a priority. Unfortunately, however, if children do resist this tax on their entrepreneurial spirit — police force will most assuredly come. These children would most assuredly face at the very least, a fine, and possibly even arrest.

Hogeland stated he’s committed to finding a way to resolve this issue. But, of course, the government still wants its cut, so he will explore the possibility of a temporary license for summer months that targets entrepreneurial youth.

“I would love to have something on our books that gave a more favorable response to that student out there cutting grass. And see if there’s maybe a temporary license during the summer months that targets teenagers,” said Mayor Hogeland.

While it is heartening to hear Mayor Hogel recognize that it’s unfortunate there are young people are complaining about the permits for cutting their neighbors grass for a few bucks and saying that he doesn’t want this to discourage kids from trying to earn money, the fact that he still believes that these kids should be licensed, speaks to the true insanity of government over regulation.

There is clear cognitive dissonance seen in Hogel’s ablity to recognize the foolish and petty nature of calling city authorities on these teenagers for trying to do something adults should be congratulating and supporting while at the same time failing to acknowledge that there is no legitimate reason for these kids to be licensed.

The formality of requiring teens to be licensed to cut grass is a simple revenue generation scheme, plain and simple. This type of regulation does nothing to keep anyone safe – and only serves to enrich the government coffers.

Once again the free market is being squeezed by unnecessary regulation, for the sake of revenue generation, which only serves to stifle competition and keep consumer prices higher.