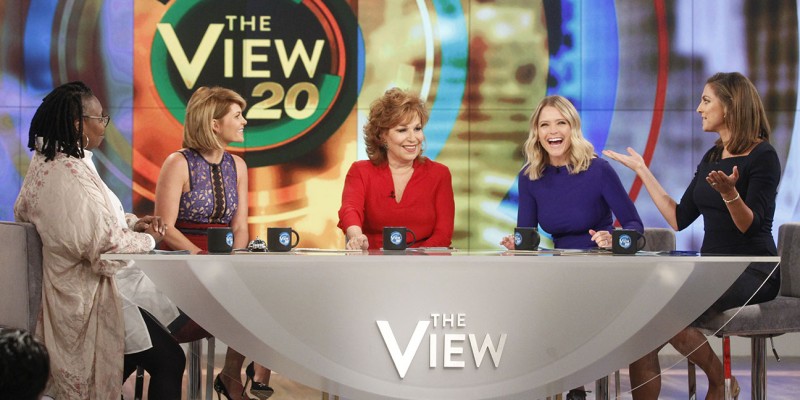 The women of The View, and yes they are women because I’m not confused about their gender, have jumped the shark. Sometimes, I wonder why we even have to write about things like this, but apparently, there are people out there that think The View is serious news. In any case, they have now claimed that the news surrounding the Hillary Clinton email scandal was really “fake news.”

Hosts Whoopi Goldberg and Joy Behar interacted over an incoherent conversation in which they claim that the story about Clinton’s private email server was “fake news” that had been planted by the Russians.

They began with talks about the Trump administration and more claims that his son-in-law Jared Kushner communicated with the Russians prior to the election. At least one of the women, Jedediah Bila, didn’t put any confidence in the story.

SUNNY HOSTIN: Why shouldn’t we believe it?

HOSTIN: The FBI is investigating this administration —

Of course, the other ladies weren’t going to let that stand and they began to attack Bila.

WHOOPI GOLDBERG: Wait, but you believed everything else.

BILA: Only what was found.

WHOOPI: I’m sorry? No, not just what we found. You know, I never want to point fingers but I will say that a lot of people occasionally said it at this very table, you know, her e-mails, she’s been dishonest, she’s been this, so —

WHOOPI: No. As it turns out–

BEHAR: It was fake.

WHOOPI: It was fake.

BILA: No, the fact that she — what I said was proven.

Wow! Just what do you say to someone this out of touch with reality? We have her emails. The FBI director even claimed she violated federal law with her email server, and yet, it’s fake news? Someone call Merrimack College Assistant Professor Melissa Zimdars and tell her to add The View to her fake news list.

BEHAR: Let me ask you something. According to what I’ve been reading, Comey finds out at that time that this is fake news that the Russians basically planted. And yet he doesn’t — when he announces there’s some issue with Hillary’s e-mail he doesn’t tell the American people what he knows which is this is fake news. Why doesn’t he say that at that time?

BEHAR: Comey was wrong in doing that.

Oh no! Everybody’s right in the conversation? You can’t make this stuff up! It’s like something out of a bad B-rated liberal movie.

As for Behar’s comment, she says what she says with not a shred of evidence to support her bone-headed comment. Not. One. Shred.

These women just can’t get over the fact that their little darling diva, Hillary, lost the election and someone they despise for whatever reason won. Grow up! If you have evidence to support your claims, please put it out there and we’ll sort it out, but making these kinds of comments with absolutely no evidence to back it up is delusional.