After months of obsessive coverage of “Russiagate,” the mainstream media is reminding the world of its hypocrisy once again as it ignores the annual meeting of one of the most secretive and powerful organizations of the global elite — Bilderberg.

The 65th annual Bilderberg Meeting, which has been held in locations around the world throughout the years, kicked off on Thursday in Chantilly, Virginia. Despite a prestigious guest list of around 130 attendees—who will arguably have more of a global influence than a few hypothetical Russian hackers—the meeting has escaped the mainstream media’s radar in the United States.

While this year’s location is less than 30 miles from the White House, and the group is set to discuss the current status of the Trump Administration, President Trump himself was not included on the list of expected guests.

The Bilderberg website listed a range of topics to be discussed in 2017, from “The Trump Administration: A progress report,” to “China,” to “Nuclear Proliferation,” to “Russia in the international order,” to “The direction of the EU,” to “The Trans-Atlantic defense alliance: bullets, bytes and bucks.”

While many have branded the global influence that comes as a result of the Bilderberg Meeting as nothing more than a “conspiracy theory,” the event’s website acknowledges its secretive nature by noting that “participants are free to use the information received, but neither the identity nor the affiliation of the speaker(s) nor any other participant may be revealed.”

The topics discussed at each meeting raise legitimate questions about whether the array of politicians who attend are being given their marching orders for the upcoming year. It also serves as a reminder that the Bilderberg Meeting is arguably a violation of the Logan Act, which sets the law for private correspondence with foreign governments in the United States:

Despite the egregious nature of the secrecy surrounding the group, and its possible consequences under U.S. law, elected officials appear as though they couldn’t care less. In fact, Republican Senators, Lindsey Graham from South Carolina and Tom Cotton from Arkansas, are even included on the guest list.

The mainstream media’s devotion to the possibility that that the Russian government may have influenced the U.S. election would have viewers convinced that it is just getting started in its war on exposing global interference in American interests.

Instead, the MSM have chosen corporate interests over truth, lending its 24/7 coverage to Trump’s latest typo while one of the most influential, secretive meets of the global elite is happening right now on American soil.

Given the history of US officials, media moguls, and others attending this nefarious event, it should come as no surprise that its coverage is absent from your newsfeed.

As the Free Thought Project reported earlier this year, declassified documents expose a decades-long relationship between the secretive elite network and the CIA. Michael Best of Muckrock recently poured through the CREST archives for references to Bilderberg and found a few interesting documents that point to the CIA’s interest in the Bilderberg meetings.

One thing that is not exactly clear is the motive that the CIA had for documenting these meetings, especially considering the fact that the CIA director at the time Allen Dulles, was an associate of the Rockefeller dynasty, who was mentioned by names in these documents. Also, many conference attendees over the years have actually been employed by the CIA. In the recently surfaced documents, the name Paul Nitze is mentioned as a member of the first Bilderberg conference, and just years later he was hired by the agency.

Four years after the fist conference took place, one member of the Bilderberg group actually reached out to Dulles personally to inform him about the meetings. In May of 1958, Joseph Johnson of the Carnegie Endowment for International Peace and the Bilderberg Steering Committee sent Dulles a summary of the issues discussed at Bilderberg. Of course, these summaries were not released to the public, but the letters about the summaries were released, which at least give proof of the existence of Bilderberg, although it does not give details of what takes place inside. The next year, Johnson wrote Dulles again about the Bilderberg group, but this time, it was to discuss his own invitation, confirming that long-time CIA director Allen Dulles was himself involved in the secretive meeting. Dulles wrote back saying that although he was not able to attend this year, that he had hoped to in the future.

Although these documents only give a glimpse into the agency’s relationship with the Bilderberg group, it does show a clear connection and friendly relations between the two. Several more mentions of Bilderberg appear in the agency’s records, but most of these mentions are in reference to appearances made by CIA agents and US presidents.

These documents are groundbreaking because for so long the US government and mainstream media have denied that these meetings even existed, and now it is proven that at least one agency and multiple presidents had knowledge of these events.

Below is a chart showing exactly how this secretive agency is connected throughout the world. 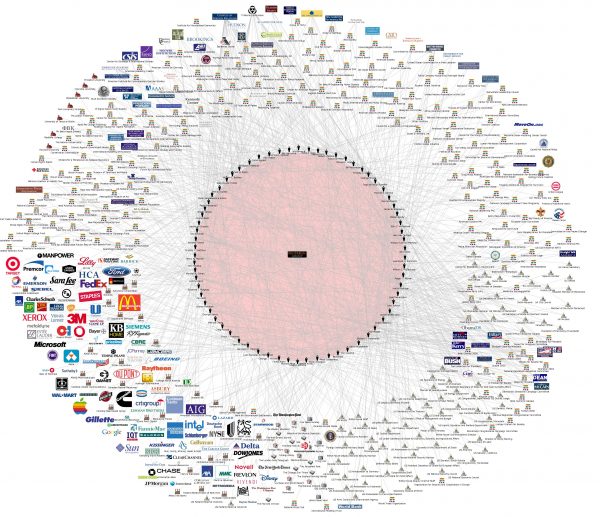