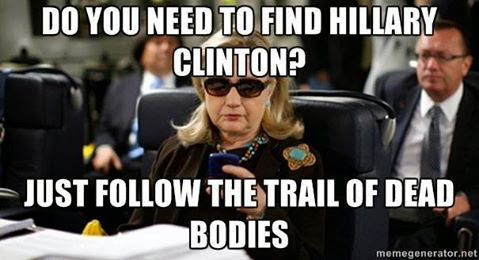 When the same thing keeps happening over and over again, under the same circumstances, it is called a pattern. Even in science, this type of pattern is used in experiments to determine a theory to be fact. Conduct enough experiments that result in the same outcome, the project then becomes fact.

This same analogy has to be applied to the long line of deaths associated with those who were a threat to Hillary Clinton. No longer can we just chalk these deaths up to being mysterious or coincidence. Almost on a weekly basis, someone who either was going to testify against her, release damning evidence on her or was going to oppose her in some way, are found dead. Thus, the body count under these circumstances has become a pattern, one which simply cannot be ignored or brushed aside as coincidence.

Only in the last few days, the body of Miami Federal Prosecutor Beranton Whisenant Jr. washed up on a beach in Hollywood, Florida. The cause of death was either a gunshot wound or some other trauma to the head. Whisenant was investigating DNC voter fraud in Wasserman Schultz’s district. Whisenant was a direct threat to Clinton in uncovering her collusion with Schultz and the DNC in fixing the 2016 election in her favor.

The shooting of Seth Rich took place on July 10, 2016 in his own neighborhood. He later died in a nearby hospital, mysteriously, I might add. He was allegedly another individual who was set to testify against Clinton on voter fraud.

Rich’s death was officially listed as the result of a robbery. However, nothing he was carrying was taken. Rich also did not die at the scene, but later died at the hospital, where, according to a surgeon, his wounds were not life-threatening and was still alive and doing fine after surgery. Yet, he later died that night after being visited by DC police who refused to allow doctors and hospital staff to enter his room for an extended time.

Sean Lucas, a process server, was found dead on the bathroom floor by his girlfriend on 08/02/2015. This was after he served papers on the DNC in connection with a voter fraud suit filed by Bernie Sanders’ attorney.

Author Victor Thorn, best known for his extensive research into the Clinton family and the Clinton Foundation and his book “CROWNING CLINTON: Why Hillary Shouldn’t Be in the White House” was found dead of an apparent suicide, according to the official story.

John Ashe, a UN official connected to Clinton corruption, died of a supposed weightlifting accident a day before he was set to testify against the DNC and Hillary Clinton on 06/22/2016. The first released cause of death was said to be a heart attack but was later changed to him having a weightlifting accident.

The trail of the assassinated goes far beyond those since Hillary Clinton first ran for president in 2008, all the way back through the Bill Clinton presidency and beyond.

Over 50 people who were either going to testify against the Clintons, present damning evidence against them, or posed a threat to their Crime Dynasty in any way have been found dead of either mysterious causes or murdered. The hit list also includes Don Henry and Kevin Ives, who were found dead on railroad tracks south of Little Rock, Arkansas in 1987. According to railroad employees, they were beaten, stabbed, and placed on the tracks. Yet, the Sheriff’s Department ruled the deaths accidental.

These boys just happened to stumble upon a police-protected drug drop via a drug smuggling enterprise based in Mena, Arkansas in the early 1980s that had Clinton connections.

Twelve Clinton bodyguards also join the list of those who apparently knew too much dirt on the Clintons and ended up dead.

Thus, we have way too many deaths associated with those who threatened Hillary Clinton, the Clinton family, or the Clinton Foundation for them to be considered a coincidence.

What we have here is a Clinton Hit Machine that continues to rack up deaths almost on a monthly basis of late, which goes completely unchecked by the corrupt media and is constantly being covered up by high-end officials in government.

Since we now have an administration interested in enforcing the law rather than preserving corruption, the necessity to bring Hillary Clinton, in particular, and the Clinton family, in general, to justice is imperative. No longer can this criminal element be allowed to flourish and feel free to murder anyone it chooses that opposes it.