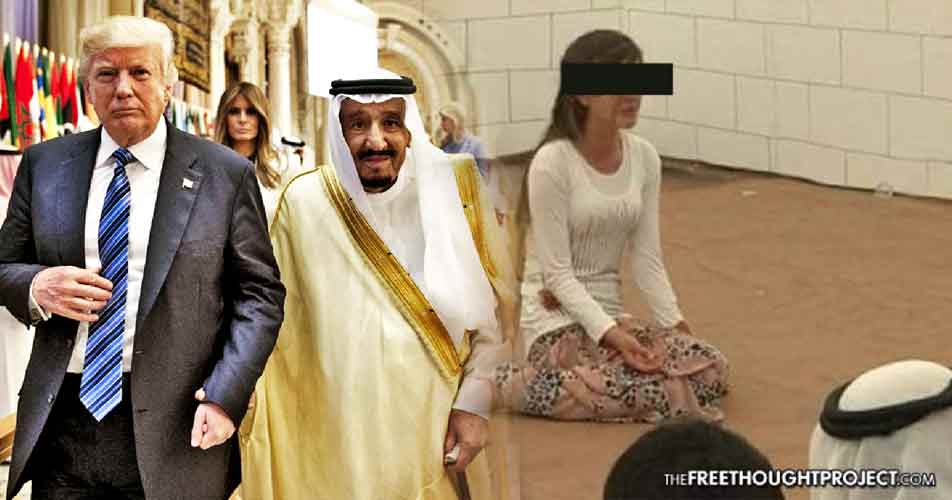 Few Americans could hardly have imagined the devastation, destruction, and horror experienced by the Iraqi people when the decision to invade Iraq was made in 2003. And no people, arguably, have endured more suffering than the Yazidi people, an Iraqi minority group.

Nadia Murad knows. The Iraqi Yazidi woman was kidnapped in 2014 and used as a sex slave by the Islamic State (ISIS). Murad has just exposed Europeans, Tunisians and US ally — Saudi Arabia — for their role in this horrific sex slave trade.

Murad eventually escaped her hell on earth and returned to her home village of Sinjar Thursday to the welcoming arms of her people. While sobbing, and standing on the roof of her old school, she addressed those gathered and those around the world who dare to listen to what she has to say.

After just three months of rape and torture, Murad escaped her Sunni Muslim captors, eventually finding refuge in a refugee camp, and later found saftey in Germany. But she didn’t stay there for long, and she’s not staying silent about what she experienced.

Murad has taken to the world stage to appeal for support for the Yazidi religious minority, in the United Nations Security Council in 2015 and to all governments globally, earning her a Nobel Peace Prize nomination and U.N. Goodwill Ambassador role.

She was one of nearly 7,000 girls who were taken as sex slaves and traded like used cars to soldiers who’d come to wage Jihad against anyone other than Sunni Muslims. She watched as the men were separated from the women and children. They were later killed and buried in mass graves. The young boys were sent off to ISIS training camps, while the women and girls were used for the sexual gratification of Sunni fighters.

She told Reuters at the time she wanted to die. “We hoped that our destiny would be like the men and be killed, but instead Europeans, Saudis and Tunisians and other fighters came and raped us and sold us,” she said.

Last year, Saudi Arabia, a country President Donald Trump just signed a $300 billion dollar arms deal with, was exposed for not only facilitating the ISIS sex slave trade — but participating in it.

According to eyewitness reports, ISIS sex slaves are being sold in Saudi Arabia.
Jihad Watch reported:

“It isn’t news that the Islamic State has long been abusing and trafficking sex slaves – especially Yazidi girls – but it has been now discovered that the sex slaves of IS are being “sold in horrifying auctions to UK (and US) ally Saudi Arabia.”

Dozens of women were being held in a large room, and it was not only Iraqis and Syrians trading women but also Saudis and Westerners, whose actual nationality was not clear.

Western women have also been reported to be among the victims in keeping with the Islamic State’s practice of enslaving kafir women:

The Islamic State’s human trafficking operation includes enslaving women who they consider to be ‘kafir’, non-Muslim people like Yazidis and Christians, before selling them for money. The depraved thugs are also involved in the radicalisation of young women all over the world and try to tempt them to come to their caliphate with false promises of wealth, marriage and forgiveness of sin.

The misdeeds and human rights violations by Saudi Arabia are astonishing, yet Trump had no problem striking a deal with the terrorist regime as well as bowing down to them.

With tears in her eyes, Murad told her village, “I am a daughter of this village.” She then called on the United Nations to, “Open a case for those that lost everything, their parents, people who can not go back to their villages.” She continued, “exhume their loved ones buried around their villages.”

Murad then had harsh words for the world that looked away, including the United States under the direction of Barack H. Obama and now Trump. Reuters said she stated the international community has failed to help free the Yazidi women and children held captive by hoards of rapists. “The international community has not delivered on its responsibility,” she said adding, “I tell anyone that you are being unjust for not supporting a minority like the Yazidis.”

She’s calling for the Yazidi genocide to be officially recognized as such and not treated as a global conflict. Ironically, it wasn’t NATO who liberated the Yazidis, it was the Shia Muslim country of Iran who, alongside Iraqi soldiers pushed all the way to the Syrian border, liberating Yazidis along the way.

The American narrative coming from Washington is that the Iranians aren’t to be trusted. They’re accused of planning to develop nuclear weapons with which to threaten the U.S. The Iranians rule with an iron fist, oppressively stifling dissent. The ancient Persian people are subjected to strict adherence to Islam, but their government’s actions, at least in this instance, demonstrate their desire to stop the Islamic State.

If Rep. Tulsi Gabbard (D-HI) and Sen. Rand Paul (R-KY) are to be believed, the U.S. government has purposefully been funding Islamic militants and supplying arms to terrorist organizations, arms which have made their way into ISIS hands. If their accusations are true, the U.S. is de facto responsible for the Yazidi genocide by not reigning in those factions.