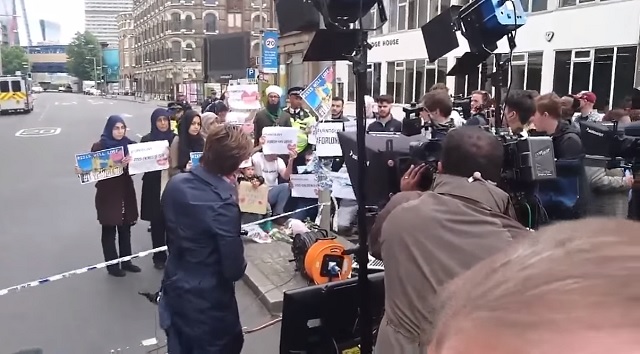 Shocking video out of London shows CNN corralling a group of Muslim women and children for an anti-ISIS photoshoot.

The group was carrying printed signs saying “#ISISWillLose” and “#LoveWillWin.”

The viral video was posted to Twitter on Sunday by user “Markantro.”

The on-air host is CNN’s Becky Anderson who descibes herself as the “Host of @CNNConnect” and “CNN Abu Dhabi Managing Editor.”

Here’s the video as aired on CNN:

My message to the #LondonBridge attackers: You are a handful of twisted fools hell-bent on taking lives https://t.co/0v17H67El1

Katie Hopkins noted the group was photographed all over London:

AP photographer Raphael Satter took photos of the group. AP used one of the photos in their article, “Attack brings out the best in London’s Borough neighborhood.”

My potted history of Borough, the neighborhood now in focus after last night's rampage. https://t.co/wDYQrFfnRD

A group of London Muslims have come bearing flowers and posters saying "ISIS will lose" and "Love will win" across a photo of Tower Bridge. pic.twitter.com/ECCLIRC3dp

CNN’s Brian Stelter tried to defend CNN’s actions hours after the video went viral by saying they and others “simply filmed” the demonstrators after police “allowed” them through a cordon to “show their signs” to the media.

Police allowed demonstrators thru cordon "so they could show their signs" to media, @CNNPR says. CNN, BBC, AP "simply filmed them doing so."