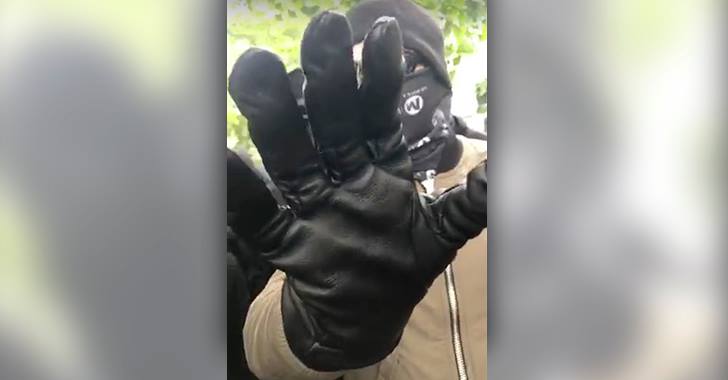 (ANTIMEDIA) In the wake of a suspected hate crime in Portland last week that resulted in the murder of two men — which the killer, Jeremy Christian, later justified by citing “free speech” — supporters of President Trump held a contentious “free speech” rally in the city on Sunday. Counter-protesters including Antifa and black bloc groups were present and appeared to outnumber the Trump supporters in the mostly mild stand-off.

Anti-Media journalist Shaun Bradley was on the ground in Portland covering the events as they unfolded via our Facebook page.

Shaun was brutally attacked by a mob of masked men after they realized he was filming the Antifa side of the protest and he politely declined one masked individual’s request to stop. The Antifa member had asked Shaun not to film unmasked attendees, and Shaun responded that he was filming in a public space. As the exchange continued, the masked Antifa member said unmasked protesters could be doxxed and lose their jobs. Shaun responded, “I’m just walking around.”

“Right, and you know, I’m just asking [sic] let’s keep the camera off our side and keep it on their side.”

“Right, and, you know, keep it on their side,” the masked Antifa member told him.

By this time, Shaun had been encircled by Antifa members. One blew an air horn of some sort directly in his face, and Shaun says another used a taser against him as another started shoving their hand into his camera (he can be heard screaming out in response). The mob chased him down as he attempted to flee. That’s where the live stream (below) cut out.

He says some attempted to trip him as he ran, and as he fell to the ground, he was kicked in the face as other protesters stomped on him. Shaun says he was eventually pulled out of the pile-on by another unspecified protest attendee who moved him toward safety. Nevertheless, his filming equipment was destroyed and his lip torn open. He also says his ribs were hit hard, and one of his front teeth is now loose. In the video below, he shows the scrapes and cuts on his arms and describes the entire experience with Antifa.

To donate funds to restore/repair Shaun’s filming equipment and cover any necessary medical treatment he may require, please click here.

Below you can view video reports Shaun broadcast today from Portland.