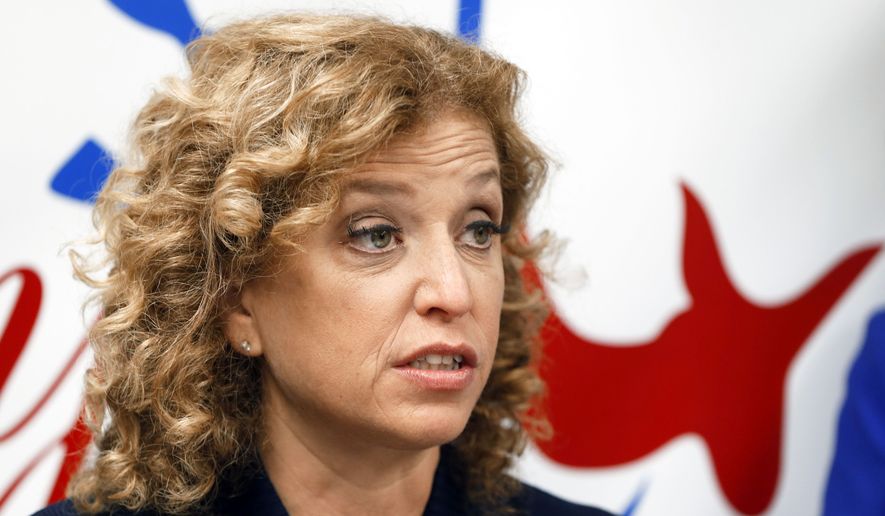 The irony to this story is the Democratic National Committee is always pushing for equal pay for equal work and mandatory minimum wages and yada, yada, yada. Yet, Bernie Sanders supporters are now suing the DNC and former DNC Chair Debbie “I violate security policy, but it’s someone else’s fault for letting me do it” Wasserman Schultz in a class action lawsuit after the DNC gave our $1 million in bonuses, including more than $300,000 to Democratic National Convention Host Committee Executive Director Kevin Washo.

The lawsuit was filed by Justin Swidler of Cherry Hill, N.J. on behalf of 40 to 50 field organizers against the DNC, Pennsylvania state Democrats, and five other state Democratic Parties. “These workers were out there in a campaign that was promising $15 an hour minimum wage and expanding the overtime rights of workers,” Swidler told CBS. He added the lawsuit seeks “fair pay for fair work” and to hold the Democratic Party accountable to the ideals it markets itself with.

Chair of the Democratic National Convention Host Committee and former Pennsylvania Gov. Ed Rendell alleged that the Democratic National Convention was separate from the operations noted in the lawsuit. Many of the plaintiffs in the class action lawsuit worked 80 to 90 hours a week for Hillary Clinton’s campaign and were compensated only $3,000 a month.

The Philadelphia Inquirerreported that although Rendell claimed the large bonus to the Executive Director Kevin Washo was in part due to volunteer work before the convention, they found that Washo, who was vice president of the political consulting firm New Partners, was paid $243,000 to help Philadelphia win the bid to host the Democratic National Convention. At the same time, Washo was paid a salary by the consulting firm and received a monthly salary of $13,000 from the Democratic National Comittee. “We might have double-paid him. I’ll have to check into it. That’s interesting,” Rendell told the publication on May 12. He also claimed that no Democratic Party donors should be upset over the bonuses. “No donor did this out of the kindness of their heart. They all wanted access,” he said. “They got exactly what they donated for. No donor should feel cheated.”

Congressman Robert Brady, chairman of the Philadelphia Democratic Party, told the Pittsburgh Gazette he was surprised there was any money left over from the convention at all and was unaware bonuses were given out until a reporter called him to ask questions about them.

It appears that there is no end to the hypocrisy of the Democrats.

In addition to the huge bonus to Washo, who received a $13,000 per month salary, interns and volunteers were paid $500 and up in bonuses. The amounts were listed in a year-end report filed with the Federal Election Commission on Jan. 31.

The payouts were determined by Washo and Former Gov. Ed Rendell, who served as chairman of the host committee. I don’t know about you, but that sounds like a conflict of interest to me.

“If we do come out and raise enough money, we will decide what to do with it, but a significant part is bonuses and I told that to almost everyone we hired,” Rendell said.

The committee raised $86 million, of which $10 million, the largest amount, came from Pennsylvania taxpayers. After all payments were settled with vendors, the committee was left with a surplus of about $4 million.

On Nov. 25, all 12 of the host committee staff received bonus checks.

Washo, who had a monthly salary of $13,000 for two years starting in March 2015, received the most. Rendell said Washo’s payment was part bonus and part back pay for the volunteer work he did during the bid phase of the convention starting in August 2013 and until early 2015. Washo was part of a small team that worked to get the Democratic National Committee to pick Philadelphia for their convention. During that time, he was working for a Washington-based political consulting firm.

Washo said his work with the early committee was “above and beyond” a volunteer job.

Washo said the payouts were decided by him, Rendell, and chief operating officer Eliza Rose.

“It’s performance. Everyone worked hard. We tried to be fair,” he said.

Keep in mind that in addition to the things I mentioned at the outset of this article, the Democrats chide corporate CEOs who get big bonuses when their companies do well. Here, we see the DNC sinking in abysmal failure and yet, their leaders and workers are getting bonuses.

A huge percentage of money flowed in from Pennsylvania taxpayers.

Last month Joseph Scarnati, Pennsylvania Senate President Pro Tempore, tweeted out that he would be calling for an investigation by the Auditor General.

Next week I will be sending a letter calling on @DePasqualePA to immediately audit all funds spent associated with the DNC in Philadelphia.

I don’t know about you, but the Democrat Party needs to be investigated and not necessarily by people in Washington. Any indication of criminal action needs to be prosecuted to the fullest extent of the law. Perhaps this lawsuit will shed some light on the subject and point the finger in the right direction.