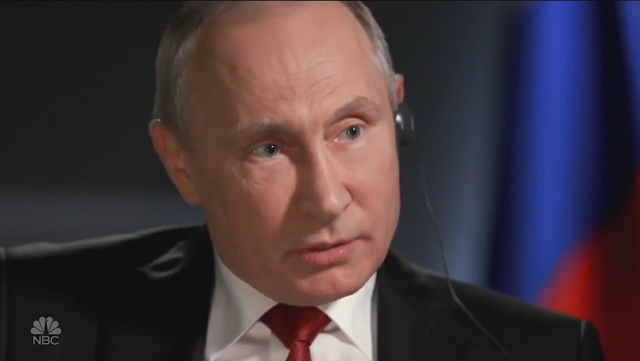 Russian President Vladimir Putin told Megyn Kelly in an interview aired Sunday that if the deep state could kill John F Kennedy, they can frame Russia for hacking attacks.

“There’s a theory that Kennedy’s assassination was arranged by the United States Intelligence services,” Putin said. “So if this theory is correct — and that can’t be ruled out — then what could be easier, in this day and age, than using all the technical means at the disposal of the intelligence services, and using those means to organize some attacks, and then pointing the finger at Russia?”

Putin also told Kelly he has a closer relationship with her after spending a day together than he does with General Michael Flynn:

“You and I, you and I personally, have a much closer relationship than I had with Mr. Flynn,” he told Kelly in comments in Russian, which were translated into English. “You and I met yesterday evening. You and I have been working together all day today. And now we’re meeting again.

“When I came to the event for our company, Russia Today [RT], and sat down at the table, next to me there was a gentleman sitting on one side. I made my speech. Then we talked about some other stuff. And I got up and left. And then afterwards I was told, ‘You know there was an American gentleman. He was involved in some things. He used to be in the security services,’ That’s it. I didn’t even really talk to him,” Putin said.

He added, “If Mr. Flynn and I had this kind of interaction, while you and I, we have spent an entire day together, and Mr. Flynn was fired from his job, you then should be arrested and put in jail.”

Putin said the Russian conspiracy is just an excuse to undermine Trump’s presidency:

The whole issue of Moscow’s alleged connections with Donald Trump’s people and accusations of interference with US elections had been “selected by someone as a line of attack against the current [US] president,” Putin told the NBC host.

“This isn’t for us to get into, these are your domestic political squabbles. So you deal with them. Nothing to talk about… I just find it amazing how you created a sensation where there wasn’t anything at all. And proceeded to turn that sensation into a tool for fighting the sitting president. You know, you’re just very resourceful people there, well done, probably your lives there are boring,” he said.

When the US journalist asked the Russian leader to comment on alleged meetings between Russia’s Ambassador to the US, Sergey Kislyak, and “anybody from the Trump campaign,” the president said he “honestly” had “no clue.” It isn’t any ambassador’s work to report to the president on his “routine work,” Putin explained.

“[The ambassador’s] boss is the foreign minister. Do you think I have the time to talk to our ambassadors all over the world every day? This is nonsense,” he said, adding, “Had there been something out of the ordinary, something remarkable, he of course would have advised the minister and the minister would have informed me.

“Nothing of that [kind] happened.”

Having reiterated that the classified intelligence agencies’ reports on Moscow’s alleged meddling in the US presidential election contain no “direct proof,” Putin said that officials in the US “have been misled and they are not analyzing the information in its entirety.”

“We have talked about it with former President Obama and with several other officials. No one ever showed me any direct evidence,” the Russian president told Kelly, adding that modern information technology allows people to “mask and camouflage” any hacking attack in a way so that no one would ever be able to track its origin.

“The other thing is that I am deeply convinced that no interference from the outside, in any country, even a small one, let alone in such a vast and great power as the United States, can influence the final outcome of the elections. It is not possible. Ever,” Putin said.

Watch the full interview above.