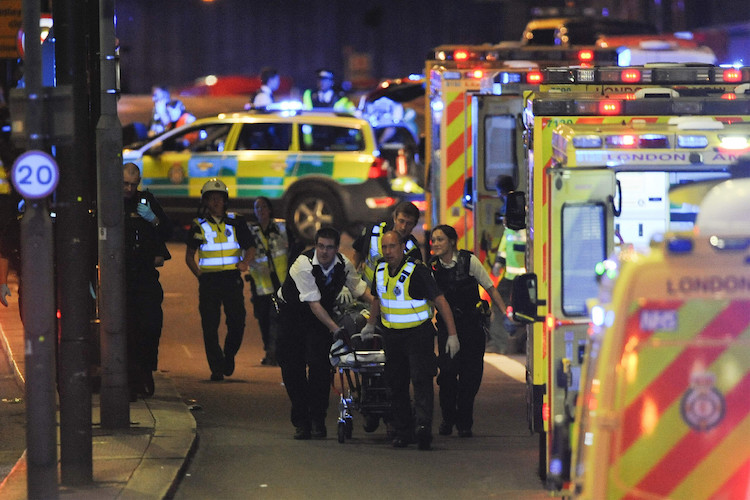 In a world where defense budgets are astronomical and wars of occupation and destabilization never end, political leaders in the UK and in Europe want you to accept street level terror as the new everyday normal. The attacks are unstoppable, they say, and the world must embrace this hopelessness with faith that the government is doing all it can to create a better, safer world. Run, hide, and call the authorities, for you are helpless in this reality, so they say. But who creates and sustains this reality?

Terrorism is defined as the use of violence in the pursuit of political aims, and as politicians respond to terrorism by holding news conferences, posing, grandstanding, eulogizing, weeping for the cameras, applauding first responders and proposing legislation, so many of the important questions which can help guide us out of such a gloomy future are going unasked and unanswered. And these questions are always the same for any of these attacks, be it the London attacks, Manchester, Orlando, the Boston marathon, 7/7 or 9/11.

Here are three things we should be always ask about when Islamic terror , all of which are fair questions for any of the major terror attacks happening in Western nations.

1. In what ways do Western governments contribute to the problem of Islamic terror?

The media wants you to believe that this type of terror is unrelated to government policies and actions, thus attempting to divorce them from the greater context of geopolitics and the decades long push toward globalist world government. But how do Western governments contribute to the problem of terrorism?

Do never-ending occupations of Middle Eastern conditions and the wrecking of stable nations contribute to terrorism? Does supplying arms and financial support to known terrorist organizations make attacks in Western nations more likely? Does bombing infrastructure, hospitals and civilians in foreign nations play a role? Does promoting and supporting the massive influx of Middle Eastern and African migrants into Western nations have an effect? Does permitting known radicals and others on terror watch lists to operate freely in the West make it more likely that events like the London Bridge attack will occur? Does preventing and punishing people for speaking out in defense of their own nations and customs contribute to the situation?

2. How does government benefit from the reaction to the problem?

Terror creates fear, insecurity, panic, uncertainty, chaos, anger, hate and irrationality, and none are more easily lorded over than those living in terror. Historically, governments make exceptional gains in power and authority when their citizens are psychologically abused.

3. What is the pre-packaged government solution to the problem?

In the case of the London Bridge attacks, the very next day, UK Prime Minister Theresa May called for government regulation of the internet, a demand which is now being echoed by wise politicians and pundits. But this measure was already being floated, it just a dramatic push for it to gain popularity.

Whether it is the Patriot Act, the pre-planned invasion of Afghanistan, calls to restrict the 2nd Amendment, greater government surveillance, increased spending on war and police state security measures, the detainment of innocent people or torture of detainees, the government always has a solution in place before an attack happens.

Accepting terror as the norm is absolutely unacceptable and must be totally rejected by people who wish to live in peace and prosperity, which will forever remain impossible while government is allowed to contribute and benefit from terror.

This article (3 Questions You’re Never Supposed to Ask After a Terrorist Attack) was originally created and published by Waking Times and is published here under a Creative Commons license with attribution to Isaac Davis and WakingTimes.com. It may be re-posted freely with proper attribution, author bio, and this copyright statement.