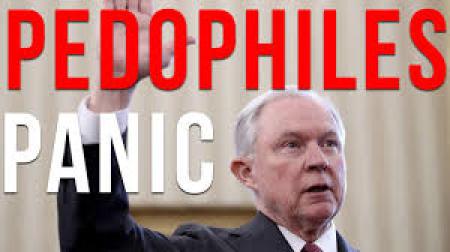 Tuesday, June 6, 2017, in Atlanta, GA, in a speech at the National Law Enforcement Conference on Human Exploitation before about 1,500 law enforcement officials and victim support counselors who specialize in child sex abuse cases, U.S. Attorney General Jeff Sessions sent a clear message that the Trump administration is going after pedophiles.

Calling pedophiles “evil,” “twisted,” “wicked,” “horrific” and “vile,” Sessions declares child abuse and child exploitation to be his top priority as Attorney General. Expressing empathy with and thanking the conference attendees for their very difficult and “dark” work, Sessions pledges to them the full support of the Justice Department.

Though delivered in his measured southern drawl, Sessions’ speech was impassioned and deserves your attention.

Below is a video of his speech (h/t FOTM‘s Will Shanley and stlonginus), followed by my transcription.

“I know from my experience working these cases in Alabama that you are stopping people [who], if not stopped, will continue to abuse more and more people. A lot of people don’t like incarceration. But the reality is, and I wish it weren’t so, that incarceration seems to be in many cases the only thing that would protect children….

Child abuse and child exploitation cases are a high priority for me as United States Attorney and they will be a high priority now for me as Attorney General. And I want you to know that we can, we are now, and we will continue. You will make a difference in this fight and protect children that need to be protected and deserve our protection in every single way….”

“What we are charged [by President Trump] with doing is reducing crime in America, and crimes against children are some of the worst in our country…. So our efforts to improve public safety will make the fight against child exploitation and human trafficking a top priority of ours.“

Then, Sessions confided that he’s “worried about the trends we’re seeing today” which he does not believe “is a blip”. He cites the following statistics for 2016 — an 11% increase in murder and 59,000 deaths from drug overdose — and attributes the child abuse and child exploitation to the breakdown of the family.

“It’s hard for any of us to believe that child exploitation even happens but it does. And it takes dedicated people to investigate and prosecute these despicable crimes. It demands courage and compassion, resilience and resourcefulness and determination…. But if you confront evil as terrible as you confront everyday, you stand up to predators who think nothing of destroying children just to make a buck or to fulfill their own twisted fantasies. You see wickedness that no one should ever have to see, and suffering and cruelty that few can imagine. Your work takes you to dark places, both virtual places and real ones, places no one ever should have to visit. You do the gut-wrenching work of collecting and reviewing evidence to these crimes. You interview victims, prepare them to tell their stories as witnesses, and support them as they recover, hoping, praying that the abuse they’ve suffered does not destroy their future. It’s tempting to become discouraged in the midst of all of this, but you persevere, and for good reason. Few others can say that their work matters so much. You are rescuing and protecting innocent children, and bringing to justice people who commit horrific acts. For this, you have my admiration and my gratitude and the appreciation of all American people. You also have my commitment, as long as I’m Attorney General, the Department of Justice will continue to strongly support your work. We will be behind you.“

Sessions then enumerates the achievements of the Internet Crimes Against Children Task Force, whose investigations have led to the arrest of more than 73,000 people suspected of sexually exploiting children, including 8,800 just last year. But he notes that:

“Even amid these heroic efforts, we also know the challenge we face today is perhaps greater than ever before…. The landscape has changed profoundly…. By all accounts, the scourge of child exploitation is getting worse. We know that just here in the United States, many thousands of criminals are involved in exploitation, millions of vile images and videos now circulate the globe, just a few clicks away from anyone who wants to call them up. Investigations and prosecutions of child exploitation are increasing, while the victims are getting even younger. We also know that while the tech revolution has brought us many benefits, it’s also made your work even more challenging. It’s given pedophiles new ways to find and exploit children. Because of technology, no place is safe for our kids, not even our homes or our schools.“

That is why it is important for law enforcement to acquire new training and new technology, and to coordinate in federal-state-local teamwork to better combat today’s predators. Sessions then reminds us that we, the American public, also have an important role to play in combating child sex abuse and trafficking — which I take as his encouragement and approval of the investigations that countless Internet citizen journalists have undertaken concerning Pizzagate:

“The importance of teamwork also extends to the broader public. We need to help our fellow citizens know what to watch for, and to encourage them to tell us when they see something. We saw the value of public involvement last month in Kansas. A man in Wichita was sentenced to 16 years in prison for distributing child pornography. This man came to the attention of the investigators when they received four separate cyber tipline reports from the National Center for Missing and Exploited Children. In this case as so many others, the vigilance of our fellow citizens made the crucial difference…. It takes all of us — investigators, prosecutors, and victims support specialists, teachers, parents, concerned citizens. Standing together, we will send a message to the predators and the pimps, the child abusers and extortionists and traffickers: ‘You will not harm our kids, and we will never rest until we find you and bring you to justice for your appalling acts.’“

Gracious as ever, Attorney General Sessions ends his speech by thanking those in the audience:

“Let me close by thanking all of you, once again, for choosing this difficult work. You see the darkest side of humanity almost every day, but doesn’t stop you. Each of you is a bright light of hope and justice for our children. Your light shines in the darkness, and the darkness will not overcome it. Keep up the great work, have a productive week here together, and thank you for having me here today. God bless you all.”

While searching for news on Attorney General Sessions’ speech at Atlanta, I found a skimpy report by Fox5 Atlanta which, curiously, has next to nothing on what Sessions said, but saw it fitting to archly insert these two sentences in its 6-sentences report:

“Sessions’ visit comes as some democrats in Washington are raising questions about his contacts with a Russian ambassador during the 2016 presidential campaign.”

If I lived in Atlanta, I would make sure not to rely on Fox5 as a source of news.