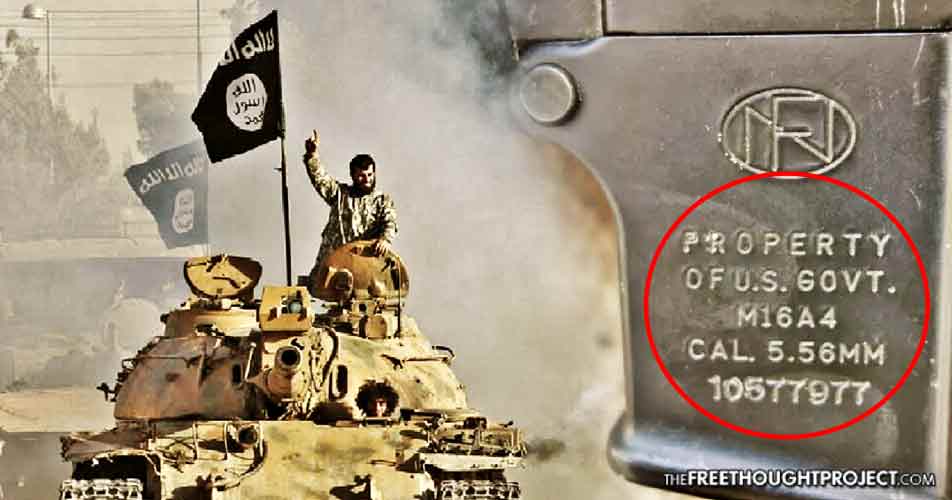 The September 2016 audit was declassified after the human rights organization Amnesty International filed a Freedom of Information Act request. It revealed that the Pentagon “did not have accurate, up-to-date records on the quantity and location” of the majority of the equipment that was meant for the Iraqi Train & Equip Program.

The missing equipment came from the $1.6 billion budget Congress allocated for the program in 2015. The budget was approved in the name of fighting the Islamic State of Iraq & Syria—a group of militants that didn’t exist until nearly a decade after the United States invaded Iraq in 2003.

It should be noted that a report from Amnesty International in December 2015 claimed that ISIS had an extensive arsenal consisting of the same U.S.-made weapons that were intended for its opposition—the Iraqi Army and “moderate rebel” groups in Syria.

Patrick Wilcken, Amnesty International’s arms control and human rights researcher, acknowledged the troubling pattern that was once again reaffirmed in the latest audit.

“This audit provides a worrying insight into the US Army’s flawed—and potentially dangerous—system for controlling millions of dollars’ worth of arms transfers to a hugely volatile region,” Wilcken said. “It makes for especially sobering reading given the long history of leakage of US arms to multiple armed groups committing atrocities in Iraq, including the armed group calling itself the Islamic State.”

Amnesty also noted that the audit shed light on the Department of Defense’s failure to track the equipment after it was delivered to ensure that it arrived in the hands of the army, “despite the fact that the department’s Golden Sentry program is mandated to carry out post-delivery checks.”

The DoD audit found several serious shortcomings in how ITEF equipment was logged and monitored from the point of delivery onward, including: Fragmentary record-keeping in arms depots in Kuwait and Iraq. Information logged across multiple spreadsheets, databases and even on hand-written receipts; Large quantities of equipment manually entered into multiple spreadsheets, increasing the risk of human error; And Incomplete records meaning those responsible for the equipment were unable to ascertain its location or status.

Amnesty International warned of problems with such programs as far back as 2007, when Wilcken noted that “sending millions of dollars’ worth of arms into a black hole and hoping for the best is not a viable counter-terrorism strategy; it is just reckless.”

“After all this time and all these warnings, the same problems keep re-occurring,” Wilcken said. “This should be an urgent wake-up call for the US, and all countries supplying arms to Iraq, to urgently shore up checks and controls.”

As The Free Thought Project has reported, a declassified Pentagon report from 2012 “proved that the growth and expansion of ISIS was a direct result of arms being sent by the U.S. to anti-Assad Islamists, with the strategic U.S. intention of toppling the Assad regime in Syria.”

This news was once again confirmed in January, when WikiLeaks released the full audio recording from a meeting between former Sec. of State John Kerry, and Syrian Opposition leaders from 2016, which revealed that the U.S. intentionally armed and aided ISIS as a means of forcing Syria’s Assad out of power.

When these audits are finally declassified, and the information is released, it is often met with a media blackout by the mainstream, and the public is distracted with material nonsense.

Given the fact that another $1 billion in weapons and equipment has seemingly vanished in the volatile region, it is all the more important to remember that while the Pentagon may never admit it, the idea that the U.S. would intentionally send weapons to militant groups, in order to influence the political climate in the region is much more than just a “conspiracy.” In fact, it is a well-documented phenomenon.