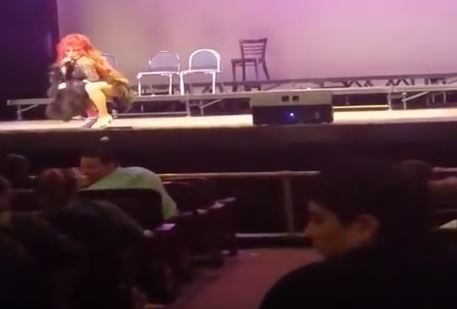 There is something very, very wrong with the New York City Board of Education.

Todd Starnes reports for Fox News that on May 25, 2017, the president of New York Public School 96 Parent Association performed in drag at a school district talent show before an audience comprised of grade school kids as young as 5.

At one point in his gyrating “performance,” the drag queen spread his legs, flashing his G-string, to wild cheers from the audience.

One parent told The New York Daily News, “I left the show the minute he started sticking his tongue out. I had my children with me and I wasn’t going to allow them to see that.”

Parent Raquel Morales filmed the seven-minute routine on her cell phone and provided Starnes with a copy. Here’s the video:

“My first reaction was what the hell is going on. Once he [drag queen] got to that part [dropping to the floor and writhing in a sexually-suggestive manner] it was chaos. People were yelling and leaving. A lot of parents were saying had they known this was going to happen they would have taken their kids out after they [the kids] had performed. The school district told me the performance was about LGBT awareness.”

Morales made it a point to explain that her objection had nothing to do with the LGBT movement, but is about age-appropriate behavior and what happened in that auditorium was not age appropriate. She said:

“I’m 100 percent against discrimination. The superintendent was the emcee – and she has a responsibility to protect all children. That wasn’t a child performing. It was an adult.”

The talent show was emceed by District 4 Superintendent Alexandra Estrella. Estrella is the Superintendent of the district’s elementary and middle schools.