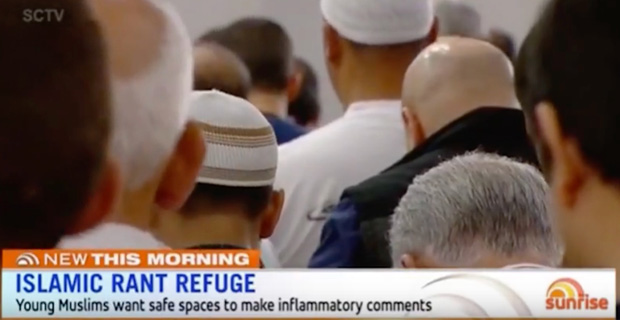 “Possibly the dumbest idea” ever

A Muslim group in Australia is demanding taxpayer funds be diverted from anti-terrorism programs to create a “safe space” for angry young Muslims to express “inflammatory” comments that they otherwise wouldn’t be allowed to say in public.

The safe space is needed because if such remarks were made publicly, they would be seen as “inflammatory,” according to the proposal.

Radio host Tom Elliot said the program was “quite possibly the dumbest idea” he had ever heard.

“What they are effectively saying is they want a tax-payer funded place where they can say things that otherwise they wouldn’t be allowed to say,” Elliot told Sunrise.

Others said the “safe spaces” could be turned into jihadist recruitment centers.

“They would be a hot bed of passing ideas and information along,” said Mal Lees.

One Nation leader Pauline Hanson decried the idea as “a load of rubbish”.

“How much more money have we got to put into this to make them feel good about themselves?” she asked.

Hanson is calling for a ban on Muslim immigration from certain countries linked to terrorism, pointing out that Australia is still in a position to save itself given their Muslim population is around 2.4%, significantly less than many European countries.

The Muslim group said their proposal was justified because of the “Islamophobia” they are subjected to. Presumably, they believe that anyone who pushes back against angry Muslims calling for jihad is being ‘Islamophobic’.

This is yet another example of how Muslim leaders are trying to entrench themselves in a grievance narrative, when in reality they should be working solely on routing out the extremists in their midst, not encouraging them.

Earlier this week, Victoria was rocked by a terror attack when gunman Yacqub Khayre took a woman hostage at an apartment building before killing another man and wounding three police officers. ISIS subsequently claimed responsibility for the siege.