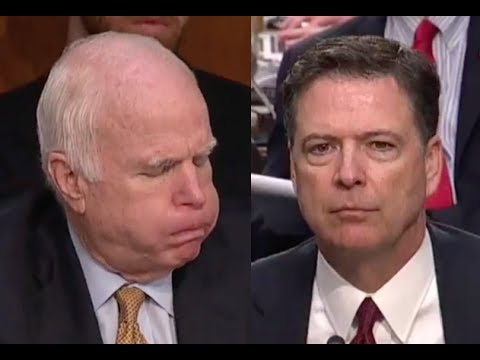 Thursday, during his appearance before the Senate Select Committee on Intelligence, former FBI Director James Comey was grilled by a very confusing-sounding Sen. John McCain (R-AZ) on what McCain called Comey’s “double standard” — in the FBI ending its investigation of Hillary Clinton’s private unsecure email server vs. the agency’s ongoing investigation of Donald Trump’s connections, if any, with Russia.

Beginning at the 6:04 mark of the video clip above, McCain and Comey had a rather incoherent exchange:

McCain: “Then when the President said to you you talked about the April 11th phone call and he said, ‘Because I’ve been very loyal to you, very loyal, we had that thing, you know.’ Did that arouse your curiosity as to what ‘that thing’ was?”

Comey: “It didn’t seem to me to be important for the conversation we were having to understand it. I took it to some, um, effort to, to, erh, communicate to me that there is a relationship between us, where I’ve been good to you, you should be good to me.”

McCain: “Yea, but I think it would intensely arouse my curiosity if the President of the United States said we had that thing, you know. I’d like to know what the hell that thing is, particularly if I’m the director of the FBI.”

Comey: “Yeah, I get that, senator. Honestly, I’ll tell you what, this is speculation, but what I concluded at the time is in his [Trump’s] memory, he was searching back to our encounter at the dinner and was preparing himself to say ‘I offer loyalty to you, you promise loyalty to me,’ and all of a sudden, his memory showed him that did not happen, and I think he pulled up short. That’s just a guess. But I, I’ve had a lot of conversations with humans over the years.“

Now why would Comey say that?

Only a non-human would say “I’ve had a lot of conversations with humans over the years”.

A reptilian Secret Service agent at the 2012 AIPAC conference