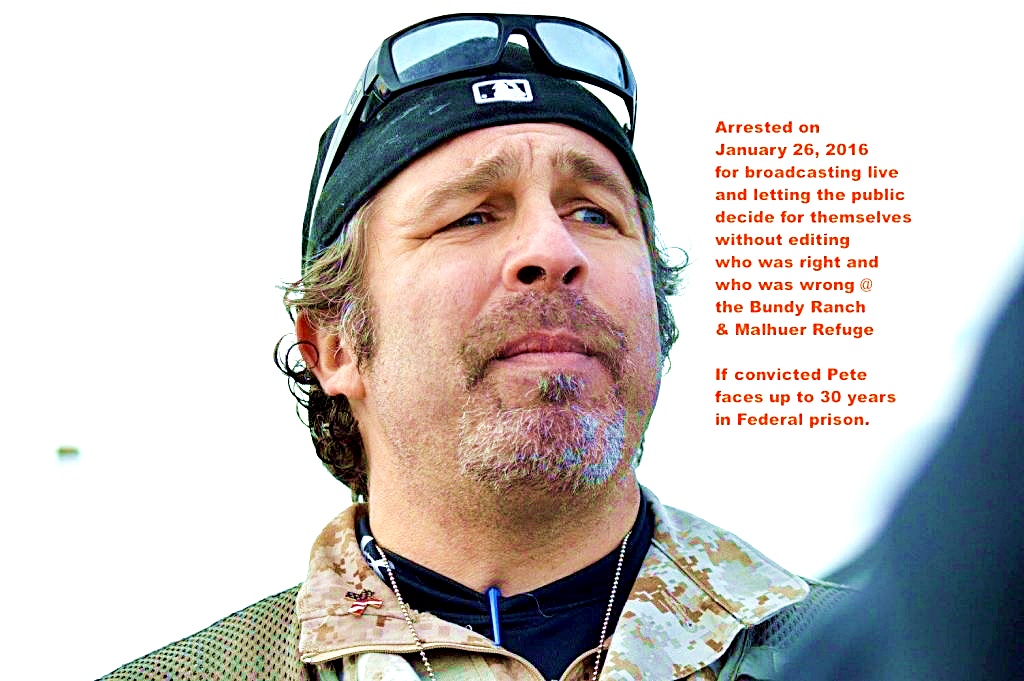 In the case of UNITED STATES OF AMERICA VS. Cliven Bundy et al, Judge Gloria Navarro has demanded the defendants all wear chains throughout their trials. The simple question is, why? These are men who have demonstrated they are not violent nor have they attempted to escape from the prison system they have been incarcerated in for almost a year and a half.

In a response to the order by Judge Navarro, attorney for Pete Santilli, Chris Rasmussen, cited the 9th Circuit Court of Appeals ruling in May 2017 to bolster the claim that his client’s rights are being violated, as are all the other defendants in the case.

“Peter Santilli hereby asserts his Fifth Amendment right to be present in Court without shackles,” reads the motion.

The motion then cites the ruling of the 9th Circuit Court.

Additionally, this decision cannot be passed off to security providers or “preemptively answered by routine policies.”

The ruling adds, “All of these requirements apply regardless of a jury’s presence or whether it’s pretrial, trial or sentencing proceeding. Criminal defendants, like any other party appearing in court, are entitled to enter the courtroom with their heads held high.”

In other words, the 9th U.S. Circuit Court of Appeals has said defendants have a right to be free of shackles and handcuffs in the presence of jurors in part to maintain the presumption of innocence until they are proven to be guilty.

Bringing these men into the courtroom in shackles biases the jury and poisons the well in the mind of jurors that these men are actually guilty before any testimony is heard.

Notice that it applies not only to trial, but pre-trial and sentencing.

The ruling by the court was emphatic in its rejection of routine shackling:

“We must take seriously how we treat individuals who come into contact with our criminal justice system — from how our police interact with them on the street to how they appear in the courtroom. How the justice system treats people in these public settings matters for the public’s perception, including that of the defendant. Practices like routine shackling and ‘perp walks’ are inconsistent with our constitutional presumption that people who have not been convicted of a crime are innocent until proven otherwise.”

“For better or worse, the presumption of innocence rests in large part on appearances. And the appearance of a defendant in court, shackled “like a bear on a chain,” can undermine that presumption. Therefore, the U.S. Ninth Circuit Court of Appeals ruled that lower courts may no longer routinely of shackle all pretrial detainees in the courtroom, even if there is no jury present,” writes Christopher Coble, Esq. at FindLaw.com.

Coble went on to write, “While many courts, including in this case the Southern District of California, permitted blanket shackling policies in the past, that rule has now changed. Going forward, ‘if the government seeks to shackle a defendant, it must first justify the infringement with specific security needs as to that particular defendant.’ In doing so, courts are required to decide ‘whether the stated need for security outweighs the infringement on a defendant’s right.'”

“Supreme Court bans the use of shackles ‘unless that use is ‘justified by an essential state interest’ — such as the interest in courtroom security — specific to the defendant on trial.'” he added. “When considering a request for shackling, a court may ‘take into account the factors that courts have traditionally relied on in gauging potential security problems and the risk of escape at trial.'”

Already, defendants in the Bundy Ranch case have had their right to a speedy trial violated. The prosecution has even stated that they could be held up to five years before it would even be considered a violation of their right to a speedy trial. Some have been subjected by the Democrat Party in Nevada to defamation of character via mailings to hundreds of thousands of potential jurors. Yet, nothing is done to stop the madness.

The government pretty much lost its case except for two convictions in the first round of the Bundy Ranch trials. They are out to make an example of these men to others who are willing to do what our founding fathers were willing to do and stand and oppose a tyrannical government that thinks it can violate the Constitution, the rights of the people, and grab land whenever, wherever and however it chooses to do so without the threat of opposition.

Thankfully, these men realize the stakes are high and they know the potential cost they face in making their stand. However, it should be of great comfort that several of these men were acquitted of some of the same charges in Oregon that they are facing in Nevada, and Santilli had all of his charges dismissed in Oregon.

Let’s see if the corrupt Judge Navarro, a woman who had absolutely no experience as a judge before being advanced to a federal judge position by the likes of former Senator Harry Reid (D-NV) and Barack Hussein Obama Soetoro Soebarkah, will follow the law and protect the rights of these men or continue down the totalitarian road she is traveling. There is no doubt in my mind that Navarro is one of the judges that have gone rogue and needs to be impeached.