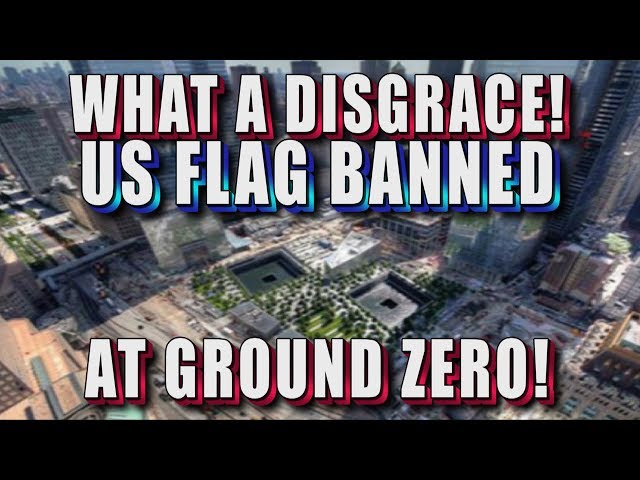 You know, I respect the fact that outlets like Google/YouTube and Facebook have a tremendous difficulty keeping up with what they say is acceptable content to provide advertisements on. There is a ton of content uploaded every minute of the day and there is just no way to filter that for said advertisements, but on occasion, there are some things that just make you shake your head, like the video report by my friend Bob Powell at The Truth is Viral. Bob’s video titled “Outrageous! American Flag Banned at Ground Zero” was pulled from monetization by Google and said to be “not advertiser-friendly.”

First, take a look at the video and see what you think.

Powell wrote in the description of the video, “The American flag has been banned from Ground Zero, site of the 9/11 terrorist attack, because it ‘might offend someone.'”

It might offend someone? How many people are offended at the coverup involved over 9/11? How many people are angered at the miserable way NORAD and flight control, as well as those who were supposed to be guarding our airspace, handled the events of that day? (For more on that, I highly recommend the well-documented book The Eleventh Day: The Full Story of 9/11.) And how many Americans were offended at the mosque proposed for Ground Zero? Anyone? But no no, we can’t stand for patriots to express that patriotism by carrying a US flag at Ground Zero.

On successive days, two different groups of visitors were told they could not carry their flag on the memorial grounds.

Now, that is bad in and of itself, but for Google to then come and demonetize the video, claiming that it is not advertiser-friendly turns insult into injury.

What about the video is not advertiser-friendly? Any real Americans and real American companies should wholeheartedly support this video, and if they don’t, can we really say they are advertisers worthy of support in the first place?

Currently, the video only has a little over 300 views, but it also has 48 likes and only 1 dislike. Is that an indication like most things in social media that gets censored that minorities are getting together and complaining to shut down people who simply expose the truth? More than likely that is what is taking place.

“Facebook, where I have over 800K followers, has made sharing my posts almost impossible,” she wrote. “These left-wing behemoths mean to strangle and starve us out while left-wing smear machines (aka think tanks) are funded by Soros and in many cases, the US government.”

“This is why we are suing the AG. Our law firm, the American Freedom Law Center (AFLC), filed a federal lawsuit in the U.S. District Court for the District of Columbia, challenging Section 230 of the Communications Decency Act (CDA) under the First Amendment,” she added. “‘Section 230 provides immunity from lawsuits to Facebook, Twitter, and YouTube, thereby permitting these social media giants to engage in government-sanctioned censorship and discriminatory business practices free from legal challenge.’ The lawsuit was brought on behalf of our organization the American Freedom Defense Initiative (AFDI), Pamela Geller, Robert Spencer, and Jihad Watch.”

Here’s the rub for these guys though, they are going to lose money, a lot of money. This Nazi-like censorship is going to bite Google pretty good. As we reported in April, via iBankCoin.com:

It’s pretty obvious what Google is trying to do here. After the Wall Street Journal began routing out Nazis on YouTube, in an effort to get ads scrubbed from their videos, a massive overhaul of YouTube’s advertising policies began, shortly thereafter. It was incredible, really, as if Google was simply waiting for an excuse.

A number of major advertisers suspended their ad campaigns on YouTube, waiting for Google to get rid of its Nazis. Unlike other social media venues, YouTube is largely dominated by right of center, logic based, thinkers.

Obviously, this was a problem. Ergo, an effort to demonetize free thinkers is underway.

A manager for YouTube posted this kind note last week, warning creators that ad revenues will be screwed until they find the Nazis.

“If you’re seeing fluctuations in your revenue over the next few weeks, it may be because we’re fine tuning our ads systems to address these concerns,”

Nomura believes $GOOGL could lose $750m in revenue this year due to the new witch hunt.

What do you think? Think this video is not advertiser-friendly, or do you think the advertisers who think that are not worthy of your patronage?