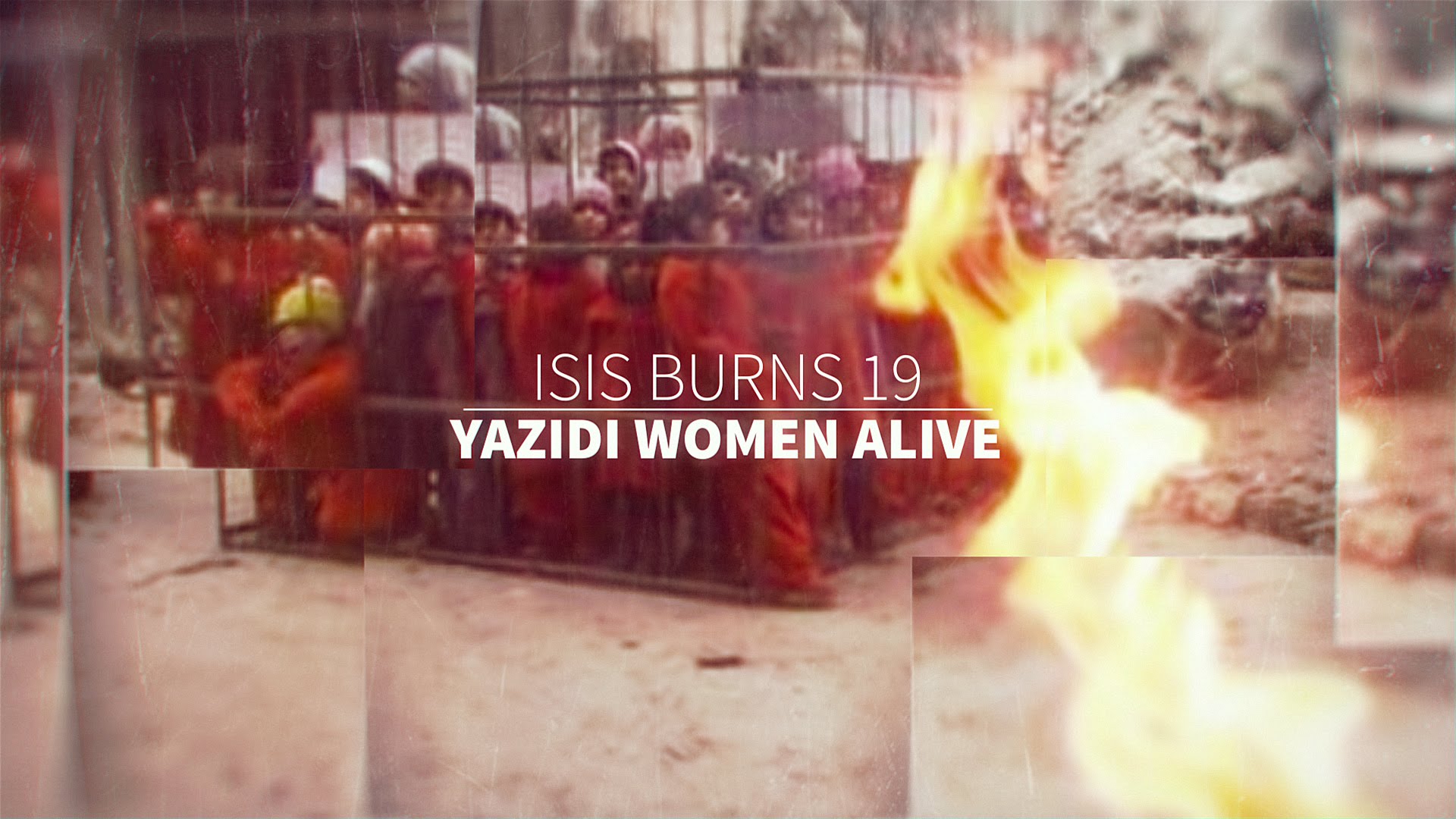 Under Islam, these devout Muslim fighters are entitled to these sex slaves. This horror is not their invention, but is codified and sanctioned under Islam.

The brutal execution of the girls was carried out in an open area and in front of hundreds of people.

The New York Times did a lengthy piece on how the Islamic State cites Islamic theology to justify its brutal acts, explaining the Quran “condones and encourages” raping women if they are not true believers of Islam.

he knelt beside the bed and prostrated himself in prayer before getting on top of her.

When it was over, he knelt to pray again, bookending the rape with acts of religious devotion.

“I kept telling him it hurts — please stop,” said the girl, whose body is so small an adult could circle her waist with two hands. “He told me that according to Islam he is allowed to rape an unbeliever. He said that by raping me, he is drawing closer to God”

Cole Bunzel, a scholar of Islamic theology at Princeton University, disagrees, pointing to the numerous references to the phrase “Those your right hand possesses” in the Quran, which for centuries has been interpreted to mean female slaves. He also points to the corpus of Islamic jurisprudence, which continues into the modern era and which he says includes detailed rules for the treatment of slaves.

“There is a great deal of scripture that sanctions slavery,” said Mr. Bunzel, the author of a research paper published by the Brookings Institution on the ideology of the Islamic State. “You can argue that it is no longer relevant and has fallen into abeyance. ISIS would argue that these institutions need to be revived, because that is what the Prophet and his companions did.”

The Islamic State consistently adheres to the shariah.

The captives were also forced to answer intimate questions, including reporting the exact date of their last menstrual cycle. They realized that the fighters were trying to determine whether they were pregnant, in keeping with a Shariah rule stating that a man cannot have intercourse with his slave if she is pregnant.

THE NY TIMES CALLS IT ISIS’S “EXTREME INTERPRETATION OF ISLAM.” IN FACT, IT IS NOT; IT IS THE LITERAL UNDERSTANDING OF ISLAM. AUTHENTIC ISLAM. THE GROUP HAS CODIFIED IT, WRITING HOW-TO GUIDES AND MEMOS OUTLINING THE DOS AND DON’TS OF SEXUAL SLAVERY.

Young Yazidi girls and teens that the Times interviewed spoke of being raped by ISIS fighters who prayed before and after the event, viewing their behavior as an act of worship.

Child rape is explicitly condoned: “It is permissible to have intercourse with the female slave who hasn’t reached puberty, if she is fit for intercourse,” according to a translation by the Middle East Media Research Institute of a pamphlet published on Twitter last December.

“We have indeed raided and captured the kafirahwomen and drove them like sheep by the edge of the sword.” Kafirah refers to infidels.

The history of sex slavery under Islam — look at this.

Sex slavery and rape is in accordance with Quran chapter and verse. Sex slaves are war booty. Following a victory, Muhammad would usually distribute the captives, both male and female, as slaves to his soldiers. And Muhammad is the “perfect example for Muslims.” According to Islamic law, Muslim men can take “captives of the right hand” (Qur’an 4:3, 4:24, 33:50). The Qur’an says: “O Prophet! Lo! We have made lawful unto thee thy wives unto whom thou hast paid their dowries, and those whom thy right hand possesseth of those whom Allah hath given thee as spoils of war” (33:50). 4:3 and 4:24 extend this privilege to Muslim men in general. The Qur’an says that a man may have sex with his wives and with these slave girls: “The believers must (eventually) win through, those who humble themselves in their prayers; who avoid vain talk; who are active in deeds of charity; who abstain from sex, except with those joined to them in the marriage bond, or (the captives) whom their right hands possess, for (in their case) they are free from blame.” (Qur’an 23:1-6)

THE MILITANTS OF THE ISLAMIC STATE OF IRAQ AND SYRIA (ISIS) TERRORIST GROUP HAVE REPORTEDLY BURNT AT LEAST NINETEEN YAZIDI GIRLS TO DEATH AFTER THEY REFUSED TO REMAIN AS SEX SLAVES WITH THE TERROR GROUP, IT HAS BEEN REPORTED

According to the local activists, the incident has taken place during the recent days in the city of Mosul in Iraq.

Abdullah Al-Malla, a local media activist, has told the Kurdish news agency ARA News, that the girls were burnt alive after they refused to have sex with the fighters of the group.

“They were punished for refusing to have sex with Isis militants,” Al-Malla said.

Another eyewitness has also said that the brutal execution of the girls was carried out in an open area and in front of the hundreds of people.

The eyewitness said the girls were locked inside the cage and were set on fire in front of the public as no one could do anything for the victims.

The terror group has been attempting to eliminate the Yazidi people as part of its ethnic cleansing efforts.

According to the reports, the terror group has taken thousands of Yazidi women and girls in their custody, mainly using them as sex slaves.