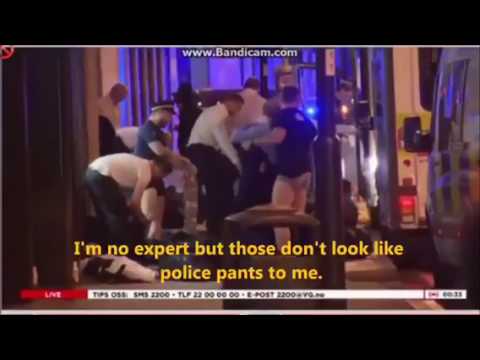 At around 9:58 pm on June 3, 2017, just 12 days after the terrorist bombing at an Ariana Grande concert in Manchester, England, Britain experienced a third terrorist attack in 2017 when three men drove a van into pedestrians on London Bridge. Wielding knives, the men left the van and went to the nearby Borough Market, where they stabbed people in and around restaurants and pubs. The attackers were believed to be Islamist terrorists.

Seven people were killed and 48 wounded, including four unarmed police officers who attempted to tackle the assailants. The three attackers, who were wearing fake explosive vests, were shot dead by police. The Metropolitan Police declared the attack a terrorist incident. Twelve people were arrested and four properties raided the following day, with more raids on the day after. (Wikipedia)

ISIS has claimed “responsibility” for the attack.

That same night, a citizen took a video of what appears to be a group of police officers changing behind a police van.

One of the officers pulled on a pair of camouflage pants. Now why would he do that?

Note that the black t-shirts the police officers wore have a white insignia on the upper left, as shown in this pic:

The same officer who put on the camouflage pants appears to be one of the three terrorists shot dead by police at 10:16 pm. According to The Guardian, the man had canisters strapped on his body.

The Metropolitan Police identified the terrorists as:

Does the man with the pale skin, red hair and beard lying on the ground look like Khuram Shazad Butt, Rachid Redouane or Youssel Zaghba to you?