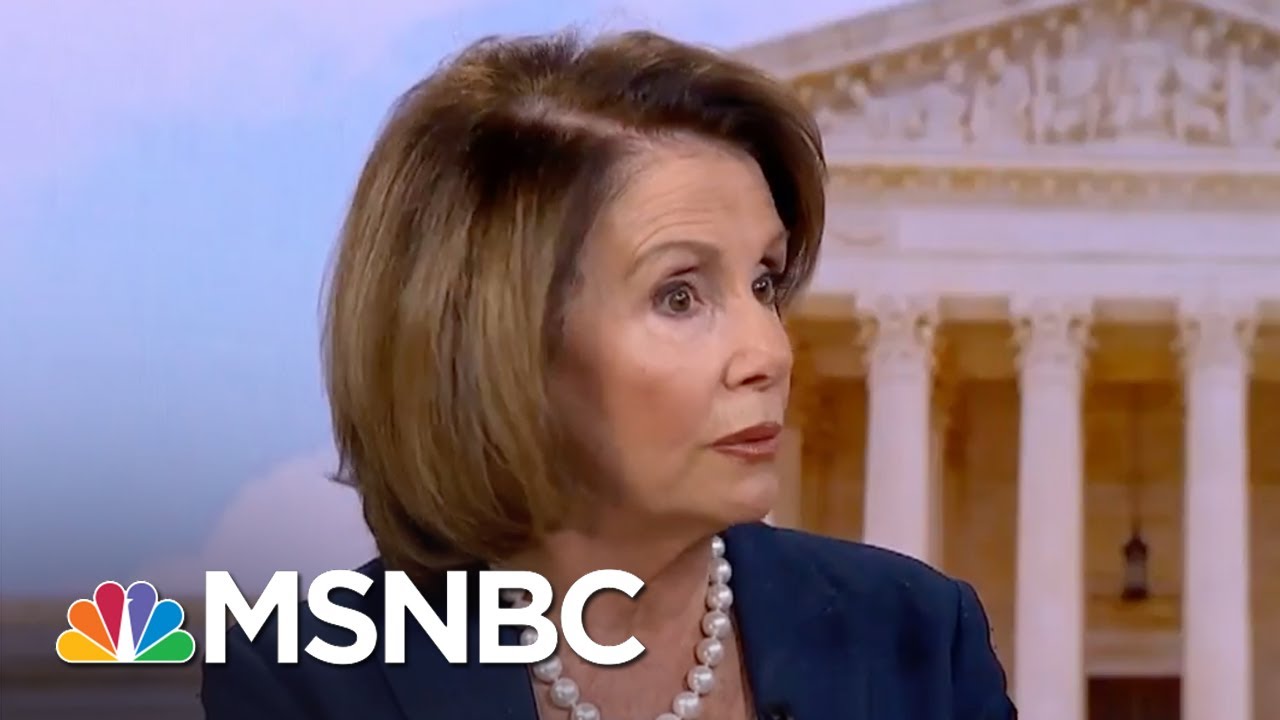 Appearing on MSNBC’s “Morning Joe” during a segment covering the James Comey hearings, Rep. Nancy Pelosi tried to pull off a huge distortion of the founding fathers’ intentions by promoting a bloated federal bureaucracy.

Host Joe Scarborough introduced Pelosi as the “Speaker to be,” something we hope won’t be the case, but given the impotence of Republicans in Congress, despite having a majority to push through anything they want and promise for limited, small government, I wonder if Scarborough isn’t correct.

When asked how she was doing, Pelosi responded, “The country is great. It can withstand anything. God is always with us, so I think we can survive.”

Wow! The utter hypocrisy of this woman is amazing! Yes, God is with us, but currently, He is with us in judgment, especially upon those who seek to promote the most abominable acts of infanticide, murder, homosexuality, and idolatry in the fashion that Pelosi and her comrades do.

Scarborough talked about the judiciary being attacked, as well as the press and other institutions and yet, they have withstood those attacks. Of course, he is speaking of President Donald Trump’s executive orders and his calling out the fake stories in the news and the absolute biased nature of the mainstream media despite claiming they are unbiased. (For the record, no one is unbiased in their reporting. No. One.)

“This is not a strengthening of our country, it is not bringing the country together,” said Pelosi. “And so we have a bigger responsibility, much bigger than politics, Democrat and Republicans to put this in a place does it honor, the vows of our founders.”

Oh, the utter hypocrisy. This woman has no idea what the founders thought about anything. She merely invokes them to sound intelligent and statesmanlike, but the truth is that her own willful ignorance is enslaving her and those she represents, not bringing liberation.

None of this was said during the usurpation of Barack Hussein Obama Soetoro Soebarkah, who stirred up racial tensions like no other president in modern history. Where was Pelosi when different classes of people were pitted against one another by the Obama administration? Where was she when he was name calling and labeling those as terrorists who were pointing to the Constitution and demanding that He obey it? She was right there defending every single one of his unlawful and unconstitutional actions.

However, notice what she does. Does she try to unite or divide deeper? Well, Scarborough doubted that people could forsake political ideologies to work together, which I agree they shouldn’t forsake them. As Scripture teaches us, “Can two walk together, except they be agreed?” (Amos 3:3).

So, off goes Nancy, digging the divide a little bit wider by attacking her colleagues.

“Trump is an enabler for them [Republicans] and they are an enabler for Trump for that economic principle…and they sacrifice everything on that altar.”

Then she tried to act as though she and the Democrats compromised with Republicans concerning Obamacare (insert laugh track here). However, remember what she said at a press conference while Obamacare was being debated, “We’ll go through the gate. If the gate’s closed we’ll go over the fence. If the fence is too high we’ll pole vault in. If that doesn’t work we’ll parachute in. We are going to get health care reform passed.”

See? She cares nothing for the Constitution or the will of the people nor her Republican colleagues unless they are RINOs to help her get her way.

“I always grant people their position,” Pelosi told Scarborough. “I respect that they believe something. I don’t know what the President believes, but I respect the position.”

But she doesn’t. She merely smears and attacks, but never does she actually appeal to the founders nor the Constitution in context to base her claims. Why? It’s because she is a socialist, plain and simple. She may have been born American, but her concept of government and how it is to function is anti-American. It is a concept that is actually that of a foreign government.

She was then asked by Scarborough what issues both sides could work on together.

While Pelosi cited infrastructure, she claimed that Republicans blocked Obama on the issue and made it political. That is absolutely ridiculous. Over and over, Republicans under Speaker John Boehner and Speaker Paul Ryan caved to the Obama administration, basically giving them everything they wanted to the tune of trillions of dollars in deficit spending and trillions more in debt. Yet, out infrastructure is still in a dismal state.

She couldn’t point to another issue, so she used her time to take another shot at President Trump.

Actually, that sounds more like how the snakes in Pelosi’s den operate.

Finally, Pelosi attempted to appear as though she wants to work with other representatives to “find common ground.”

The problem in that is that there can be no common ground with those who love freedom and those who are socialists, Communists and totalitarian minded people, no matter how much they take God’s name in vain (Exodus 20:7).