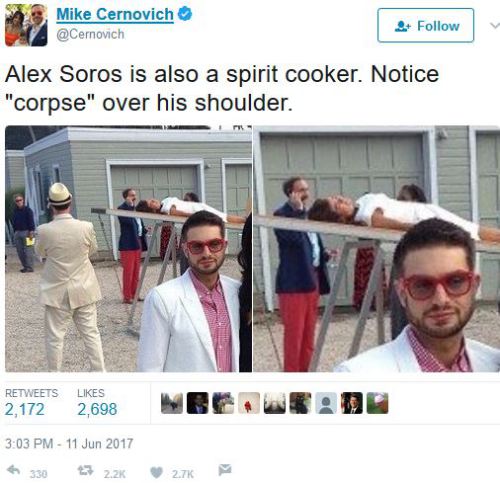 About 7 months ago, Alex Soros posted a pic to his Instagram account which Mike Cernovich claims is evidence of Alex partaking in the cannibalist “spirit cooking” devilry.

Ordinary Americans found out about spirit cooking, a satanic sex cult ritual, when mere days before the Nov. 8 presidential election last year, WikiLeaks published an email exchange between Hillary Clinton’s campaign chair John Podesta and his brother Tony — of an invitation to the brothers from “performance artist” Marina Abramovic to attend a “spirit cooking dinner”. (See “Evidence that Hillary Clinton and her associates are satanists”)

As explained by Paul Joseph Watson of InfoWars, “spirit cooking” is a “sacrament” in Thelema — a religion founded by British satanist Aleister Crowley, whose motto was “Do As Thou Wilt” — in which menstrual blood, breast milk, urine and sperm are mixed. According to Abramovic, if the ritual is performed in an art gallery, it is merely art, but if the ritual is performed privately, then “spirit cooking” is a “spiritual ceremony” — “to symbolize the union between the microcosm, Man, and the macrocosm, the Divine” and “a representation of one of the prime maxims in Hermeticism ‘As Above, So Below’”. Blah, blah, blah.

Below is Alex Soros’ Instagram post. Note the woman in white lying on a slab behind Soros. (Should Soros take down that post, it is archived here.)

This is what I was able to find on the net:

Whatever the Instagram pic and text mean, what is evident is that diminutive Alex Soros, with his goatee, red-framed glasses and red shoes, fashions himself after the comic book version of the devil. All he’s missing are the horns.