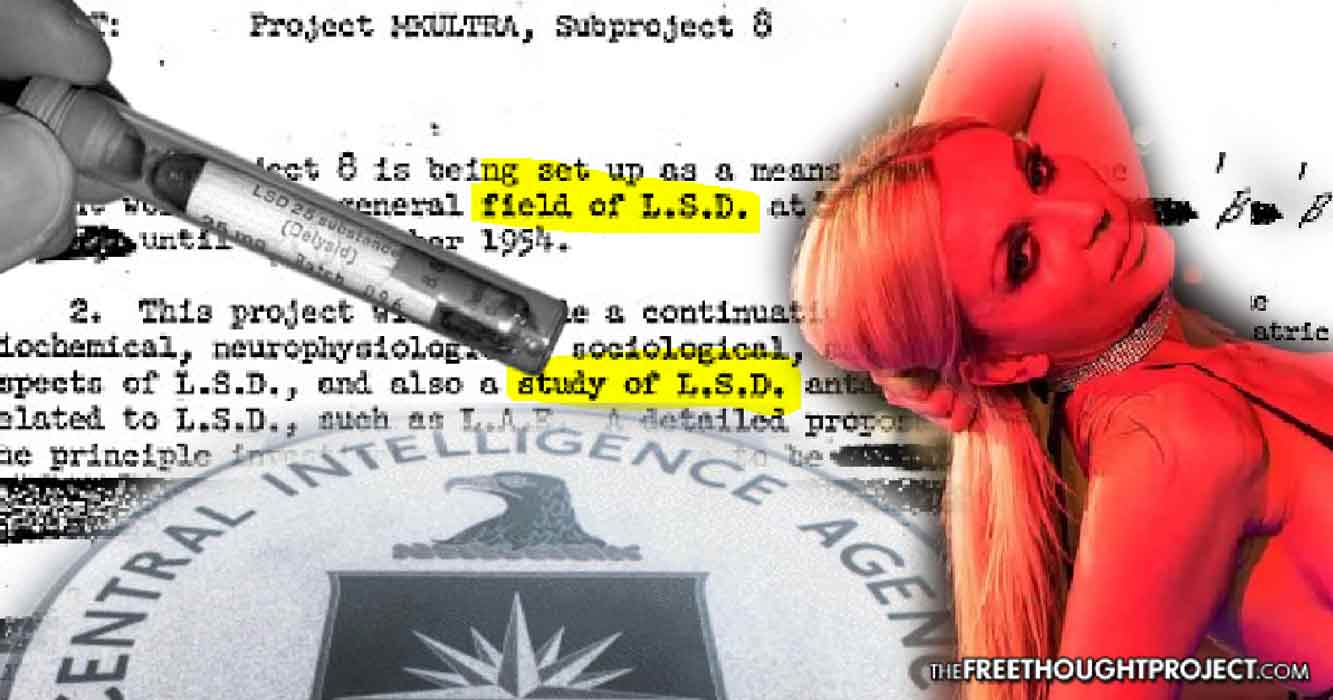 Your government will, indeed, perform experiments on you if it so chooses, and while some are undertaken with Nazi-esque malevolence — like the atrocities committed in the Tuskegee Study, a 40-year operation infecting innocent Black men with syphilis — others, like Midnight Climax, out the State’s utterly twisted flirtation with mind control.

Part of the notorious MKULTRA program, Midnight Climax — every bit as lascivious as one would expect from an agency founded in duplicity — might be one of the CIA’s most revealing experiments in thought control through substances, as well as its lesser-known entrée into the business of drugs and prostitution.

And now the corporate, mainstream media has finally decided to address the abhorrent crimes committed under the green light by nefarious CIA Director Allen Dulles — who signed off on MKULTRA and, thus, its iterations, on April 13, 1953.

One part in a series on the History Channel, America’s War on Drugs, reveals in documents and interviews how the CIA paid prostitutes to entice unwitting, working class johns with illicit sex in order to dose them unknowingly with pure LSD — acid, lysergic acid diethylamide, one of the psychedelics exploding into America’s drug scene in the 1960s — for the project known as Midnight Climax.

Amid fears The Russians might perfect mind control before the United States government could manage to do so, the CIA turned unapologetically to experiments with LSD, leaving victims none the wiser — setting up fake brothels in San Francisco and, later, Marin County, where hired prostitutes would bring the agency’s prey: the unremarkable men of the lower and working classes who would be unlikely to retaliate if anything went awry.

“The CIA was scared stiff the KGB was going to get all this LSD and come over and start dosing people,” Richard Stratton, a former hippie pot kingpin ultimately caught and imprisoned, explains of Midnight Climax for a preview of the History Channel show. “So, we bought every drop of LSD in existence at that point.

George Hunter White, a federal narcotics agent and covert captain with the CIA precursor agency, Office of Strategic Services, sought to develop or discover a substance with potential to control the minds of prisoners-of-war — a reportedly failed attempt to best the KGB — so they would reveal privy and classified information upon interrogation.

“American chemist Sidney Gottlieb was the brains behind White’s brawn,” Troy Hooper wrote for SF Weekly in 2012. “It was the height of McCarthyism in the early ’50s, and government intelligence leaders, claiming fear of communist regimes, were using hallucinogens to induce confessions from prisoners of war held in Korea, and brainwash spies into changing allegiances. What better way to examine the effects of LSD than to dose unsuspecting citizens in New York City and San Francisco?”

Stocked with booze and attempting to mimic a “French whorehouse,” rooms in the agency’s bogus brothels — replete with images of women in bondage and prints by artist Henri Toulouse-Lautrec — also came complete with two-way mirrors for operatives to kick back with martinis, watch the drug-fogged sexual activity, and scribble notes on what they observed.

“It was supposed to look rich, but it was furnished like crap,” a narcotics agent and frequent visitor to one of the elaborate brothels told John Marks, who authored, “The Search for the ‘Manchurian Candidate:’ The CIA and Mind Control.”

“An unsuspecting john would think he had bought a night of pleasure,” Marks penned, but would “go back to a strange apartment, and wind up zonked.”

Employing various code words and the sterile terminology to be expected of the CIA, agents recorded the encounters diligently — and although the bulk of those documents were destroyed in a purge of information on MKULTRA and Midnight Climax, seven boxes escaped the agency’s attention, surviving to provide insight into both those programs and the psychology of the agency.

“Certain individuals [the prostitutes] would covertly administer this material [the drugs] to other people [the johns] in accordance with [White’s] instructions.” Knowing the prostitutes faced inherent risks in the operation and that the program could be derailed easily — particularly as its illegal nature might raise eyebrows around the agency and elsewhere — the CIA’s hired sex workers were not required to keep receipts or otherwise account for spent funds.

As such untenable toeing of the lines tends to do, Midnight Climax quickly devolved into an authoritarian operation, devoid of medical screening and care for its forced test subjects, and ultimately expanding to multiple brothels — and myriad drugs.

In fact, one of the first brothels set up by the CIA in New York City saw the program’s first tragedy — U.S. biological warfare specialist Frank Olson either lept or was pushed from a tenth-story window in 1953.

“Paradoxically, greater care seemed to have been taken for the safety of foreign nations against whom LSD was used abroad. In several cases [overseas] medical examinations were performed prior to the use of LSD. The [domestic] program … demonstrates a failure of the CIA’s leadership to pay adequate attention to the rights of individuals and to provide effective guidance to CIA employees. Though it was known that the testing was dangerous, the lives of subjects were placed in jeopardy and their rights were ignored during the 10 years of testing that followed Dr. Olson’s death.”

No employable tactics in LSD were discovered and no efficacious counter-intelligence operations or methods were ever derived — but the program, and its parent MKULTRA certainly succeeded in ruining the lives of many of the program’s unfortunate victims.

“Testing of unwitting individuals was suspended in 1964 [after the discovery and outrage over the program by the CIA’s Inspector General the previous year], at least officially. Still, the CIA safe houses in San Francisco and New York City continued to operate for a year and a half longer. Scrutiny of the program intensified at CIA headquarters in Virginia, and subsequently the Bay Area safe houses shut down in 1965. New York City’s operation stopped in 1966. Intelligence officers conceded that the drug-testing exposed the agency to a serious ‘moral problem.’”

Considering the wholly egregious manifestation of Midnight Climax — its mendacious premise, disgustingly manipulative facets, and the eagerness with which depraved operatives carried out their tasks — it’s a wonder the CIA managed to concede it had dismissed scruples to carry out these human experiments.

It must be noted psychedelics, in themselves, are not necessarily harmful substances — it was the surreptitious slipping of LSD to victims without their knowledge and without medical screening or care which led to deleterious effects for an untold number of people which caused direct harm by the CIA.

Programs like MKULTRA might have officially ended decades ago, but given the current climate of heightened xenophobia, Red Scare-anoia, and ruthless and unforgiving domestic surveillance, it would be imprudent — if not foolhardy — to grant the U.S. government a clean slate of trust.

To wit — and to what should be the consternation of the American public and a remarkably inarguable cause for citizen vigilance — White, who died in 1975, later recalled of the odious attempts at mind control,

“I toiled wholeheartedly in the vineyards because it was fun, fun, fun. Where else could a red-blooded American boy lie, kill, cheat, steal, rape and pillage with the sanction and blessing of the All-Highest?”