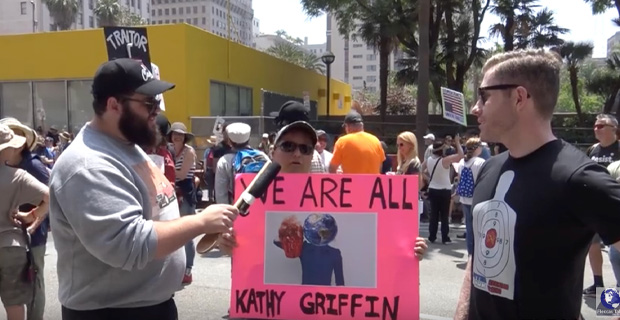 Clueless leftists don’t even know what they’re demonstrating against

During an anti-Trump protest march in Los Angeles, YouTuber Austen Fletcher exposed the sheer cluelessness of leftists when it came to what they were actually protesting against.

“We’re gonna yell about why we don’t like Trump so he hopefully quits,” joked Fletcher, mimicking the protesters before he spoke to some of them.

One woman holding a placard of Kathy Griffin mock beheading Trump claimed that Griffin “actually spoke for all of us,” to which Fletcher pithily responded, “She didn’t speak for me, that’s not all of us.”

“Basically Trump is working for Putin,” asserted another woman, but when challenged to explain how, all she could say was, “That’s all gonna come out, what did I see concretely, you know, I can’t point to any one thing.”

The theme of Trump being in bed with Putin was a popular one, despite the fact that not a single leftist could present any objective evidence-based argument to prove it.

Another young man asked what he was actually protesting against didn’t even have an answer, merely responding, “Erm, what’s this for?”

“Attacks against gays, I haven’t heard anything about that,” responds Fletcher.

He subsequently admits that he didn’t even vote, proclaiming, “We can’t wait for 2018.”

Another man then baselessly claims that Trump’s entire policy agenda is based around getting back at Obama because Trump was offended at a White House press correspondents dinner, “So everything about everything he does is just about embarrassing and destroying the legacy.”

A man which a sign that reads ‘Reminder: We impeached someone for lying about a blow job’ is then asked what “offenses” he is protesting against.

“Like lying about Russia,” he explains as well as collusion between Trump and Russia. When asked specifically what collusion he is referring to, the man responds, “We’re still finding out.”

When asked what he thought about the revelations that emerged out of Hillary’s campaign emails, another man could only respond with “I’m sorry,” before backing away.

“This is all very sketchy stuff,” he responds.

“Did you know that all those things we just listed were actually done by Hillary Clinton?” the man is told.

The video underscores once again how leftists are fueled by hysteria and Trump Derangement Syndrome and don’t even know what they’re protesting against when challenged.