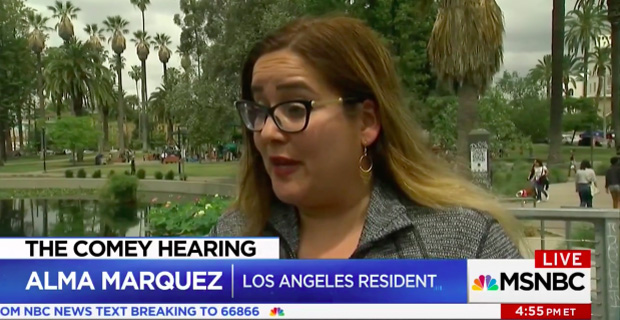 In a vox pops segment about the testimony of former FBI Director James Comey, MSNBC was caught trying to pretend that a former Obama campaign director was just a random woman on the street giving her opinion.

Canvassing the views of “everyday folks,” the network played a clip of a woman described as a “Los Angeles resident” named Alma Marquez.

“Where there’s smoke, there’s fire, and the fact that he would make a very specific request to have everybody else leave the office so that he would be alone with Comey, for me, speaks volumes,” she said.

However, it was later revealed that Alma Marquez was the CA Latino vote director in 2008 for the Obama campaign and describes herself as a “political strategist”.

Hardly just an “everyday” random woman on the street.

This is just the latest example of fake news media manipulation and staging in recent weeks.

Last week, BBC News was caught editing an eyewitness description of a knife attack to omit the fact that the attackers, three Muslim women, reportedly shouted the word “Allah” while they were stabbing their victim.

CNN was also accused of staging a Muslim anti-terror protest after the London Bridge terrorist attack after host Becky Anderson was caught on camera directing protesters after they had been allowed through a police cordon.

CNN denied they had staged the incident, but their excuse didn’t stand up to scrutiny.

Footage that subsequently emerged showed the Muslim protesters being handed placards and flowers by unknown individuals.

Last year, CNN was caught in another embarrassment when they interviewed an “outraged” anti-Trump protester the day after the presidential election.

It later emerged that the individual was actually a cameraman who had worked for, you guessed it, CNN.